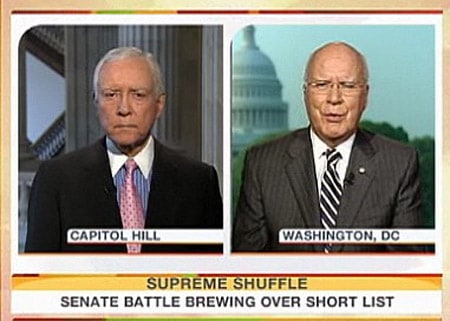 "Hatch didn't elaborate in an interview Monday. Appearing with Senate Judiciary Committee Chairman Patrick Leahy on NBC's 'Today' show, the Utah Republican said only, 'I heard Sen. Hillary Rodham Clinton's name today and that would be an interesting person in the mix.'Hatch wouldn't say whether he'd support Clinton. But he did say 'I like Hillary Rodham Clinton' and said he thinks she's done a good job for Democrats. Leahy, a Vermont Democrat, retorted: 'I think she's done a good job for the country, not just for Democrats.'"

Hatch is also on record heaping praise on frontrunner Elena Kagan, in an interview last May:

"You have to admit, Elena Kagan is a brilliant woman. She is a brilliant lawyer. If he picks her, it is a real dilemma for people. And she will undoubtedly say that she will abide by the rule of law."

Watch Leahy and Hatch on Today, AFTER THE JUMP…