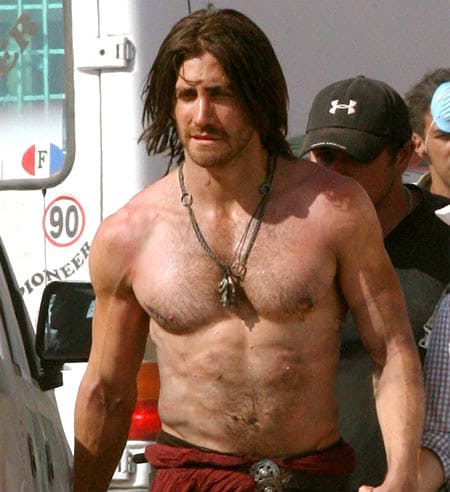 Last year, when these rippling photos of Jake Gyllenhaal on the set of Prince of Persia surfaced, director Jerry Bruckheimer insisted he didn't "juice up" for the role:

"No, he didn’t [use steroids]. No drugs! No drugs, he just worked really hard. Well he’s a cyclist anyway and he bikes all the time so we just had him do a little lifting, but he looks fantastic."

[I] never did anything this intensive before [to change my body]. It’s a physical role. And when I commit to playing a part, it’s 110 percent. We worked really closely with David Belle, who invented Parkour. I worked with a lot of gymnasts. I started jumping off of a lot of things that were padded and learned the fundamental stuff, and then slowly started working on harder surfaces, really carefully. And I’d say, ‘OK, I’ll try it,’ and then I’d say, ‘OH GOD. OH, please.’ But then I’d get it, and we’d go a little further and a little longer and a little higher and just kept it up…It got a little bit dicey there near the end, when they saw that I liked doing things that were dangerous. I tried my hand at things that were pushing it a little bit. There was this big 35 foot jump that I did that got a little hairy.”

Previous Post: « Watch: Jane Lynch and Her Fiancee Show Off Their Rings
Next Post: Watch: Rachel Maddow on the Republican ‘Partay’ »