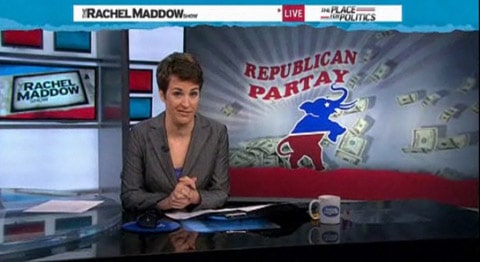 Rachel Maddow looks at the Republican Party's recent troubles, which include the resignation of top fundraiser, former Ambassador Sam Fox and RNC Chief of Staff Ken MacKay. All this comes in the fall-out from disclosure of the RNC's expense reports, which included a staffer's trip to a bondage-themed strip club which featured lesbian sex acts.

Previous Post: « Jake Gyllenhaal on How He Got So Juiced
Next Post: Watch: Stomacher’s Time-Lapse Trip Around the World »