A major "Don't Ask, Don't Tell" rally is planned for this Sunday in Lafayette Park in front of the White House. 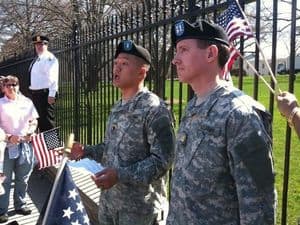 GetEQUAL writes: "On May 2nd at 12:00 noon (EDT), GetEQUAL, Queer Rising and Talk About Equality will gather outside the White House to demand that President Obama immediately include 'Don’t Ask, Don’t Tell' (DADT) repeal language in his Defense Authorization transmittals to Congress to ensure repeal of the ban this year. There will also be a solidarity rally in Phoenix across from Sen. McCain’s Phoenix office."

The group adds: "In his January State of the Union address, President Obama promised to repeal the “Don’t Ask, Don’t Tell” (DADT) policy this year. Since that time, a series of statements from the Administration have suggested that the President is no longer committed to repeal this year. Leaders in Congress and organizations leading the fight for repeal have called on the President to clarify his commitment and show leadership—yet, the President remains AWOL.

With the possibility of losses in the House and Senate for Democrats this Fall, waiting for a review of DADT may very likely delay repeal for years. The LGBT community and allied communities will continue to put pressure on the President and members of Congress to follow through with their pledge to repeal DADT this year."

Another demonstration is planned in Phoenix: "There will be a coordinated rally across from Senator McCain’s Phoenix office at Desert Storm Park. The Phoenix Rally will feature the “McCain Five” (Petty Officer Lonnie Allen Howard-Stidham, Jimmy Gruender, Meg Sneed, Luisa Valdez and Lee Waters), the activists arrested on Monday after refusing to leave Sen. McCain’s Phoenix office after being denied a meeting with their Senator. The rally is sponsored by H.E.R.O. (Human & Equal Rights Organizers), for more information on the Phoenix rally contact Rev. Brad Wishon at 623.570.6166 or revwishon@aol.com."