A 32-year-old man says he was attacked by a group of men who used anti-gay slurs outside AmVets Club in Missoula early Saturday morning, the Missoulian reports: 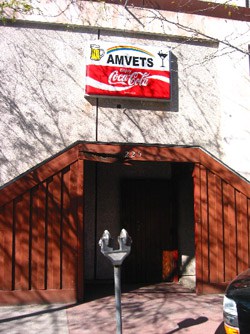 "According to police, there were between eight and 10 aggressors present during the assault, which occurred shortly after midnight outside the bar at 225 Ryman St. However, it's unclear how many men actually participated in the attack, and police say some of the men were yelling and jeering at the victim but not hitting him.
The victim did not report the assault until Saturday night, after he had driven himself to the hospital earlier in the day.
He complained of pain in various areas of his body, but no lacerations or bruising were documented by an officer who took the report, according to Sgt. Bob Bouchee, who added that none of the injuries were serious. The man was treated and released from the hospital.
Bouchee said investigators have not yet determined if the man was targeted because he is homosexual, or if the discriminatory term was being used flippantly as a crude insult. 'I can't say for sure that the victim was chosen out of discrimination or if the derogatory term was used against him as part of the disturbance, but there were some words used that lead us to believe it was a discrimination-type assault,' Bouchee said."

The crime is being investigated as a robbery, as items were stolen.

I've been to AmVets (shot that photo of it a few years ago). It was a bar meant to be for American Veterans (hence the name) but it's been co-opted by the LGBT community. It's in the basement and has as much ambience. It's the only game in town, as far as gay bars (and dance music) go. Locals are aware, so I'm not surprised a bunch of gay bashers would know where to find a target.