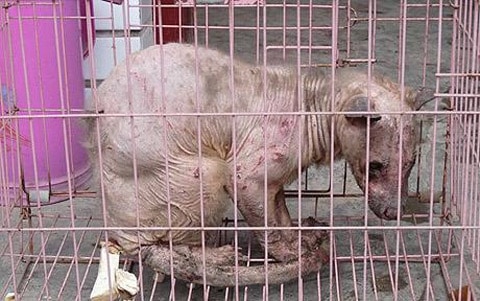 This sad looking creature which resembles a hairless bear with a kangaroo-like tail was trapped by hunters in Sichuan province in China and now everybody's running around saying it's an 'Oriental Yeti'.

Said hunter Lu Chin: "'It also does not sound like a bear – it has a voice more like a cat and it is calling all the time – perhaps it is looking for the rest of its kind or maybe it's the last one?"

Or maybe it's just scared shitless?

"'There are local legends of a bear that used to be a man and some people think that's what we caught,' he added.
Local animal experts now plan to shipped the mystery beast to scientists in Beijing who will perform DNA tests on the beast."

And isn't it obvious they're taking first class care of it? Exotic animals don't have the best record in Beijing. Take a good look. This is probably the last you'll see of the sad creature.