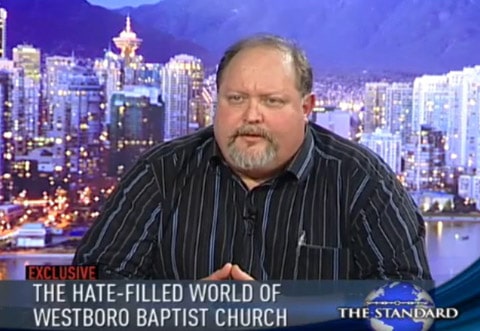 Says Phelps: "Everything that's going on in America right now in [Fred Phelps'] twisted mind is about God being upset with America because they're moving in the direction of supporting equal rights for gays. So everything that's happening is a manifestation of God's wrath at the country for that."

Another revelation: Fred Phelps is a Democrat.

Previous Post: « ‘GetEQUAL’ Activists Who Staged Pelosi ENDA Sit-in to Be Arraigned
Next Post: Madonna, Currently in Malawi, Should Speak Out in Support of the Imprisoned Gay Couple There, Whose Trial Begins Today »