They are among the unknown soldiers.

If one gay person was killed in defense of America, issues such as the destruction of unit morale or the fear of people not wanting to join the military devalue their sacrifice. This is not about appeasing the uncomfortable feelings of a minority; this is a universal and transcendent matter of justice. America was built on the common Jewish and Christian heritage of justice when the Bible commands: “Justice, justice you shall pursue” (Deuteronomy 16:20).

It is easy for those who do not live in fear of being ‘outed’ to say: ‘We must wait and examine this law further.’ But when you have to watch what you say, where you go, and who you talk to, this erodes the human person. When you live in fear that the wrong pronoun slips through your lips, or a co-worker see you in public with your life long partner and you respond ‘this is just a friend’, this degrades your human self worth.

Gays and lesbians wait not for justice, for them justice is denied, but they wait for the ‘knock on the door.’ They are haunted daily waiting ‘to be found out.’

We went to foreign lands to wage war to liberate people so they would not have to live in the fear of waiting. But citizens of our own land who served nobly, who died to secure freedoms which they would never profit from, must live in fear waiting for justice.

"Don’t Ask, Don’t Tell" is an unjust law. It degrades the human soul because it forces those who willingly serve to live in shameful humiliation because of deceit and fear. It undermines the very principles and values of what it means to be an American. Living the façade of a life goes against the Core Values of every Armed Service. How much longer is justice going to be denied? There comes a time when despair and fear must end.

Mr. President, we depend on your sense of justice and fairness to help end this gross injustice so we, as a nation, do not have to wait for the final marker to be placed in the last cemetery.

We ask you to lead the way in repealing this unjust law and replace it with a policy of non-discrimination that advances open and honest service. A law that is consistent with true American values and honors the sacrifices of so many who have served – and died — in silence.

(The writer is currently serving and unable to identify himself publicly.) 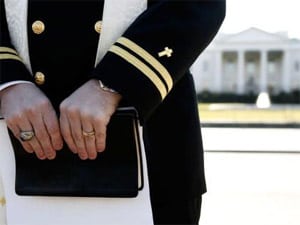 As an active-duty military chaplain who just returned from a 15-month deployment in Iraq, this is my appeal for justice:

Over the years some of us have buried our closest friends — officers and enlisted, African American, Latinos, Native Americans, Asians, Whites, rich, poor, Protestants, Catholics, Muslims and Jews. They had the courage to make the supreme sacrifice in order for us to reap the bounties of freedom. We owe them a debt of gratitude which can never be repaid.

What is remarkable about these Marines, Soldiers, Sailors, Airmen and Coastguardsmen is they understood the personal risk when they answered the highest calling of our nation. What could be a nobler act then to give one’s life to one’s country, knowing that in their lives many freedoms would be denied them?

And when their story is told a significant piece of their life would be missing.

As they sleep under the crosses, the stars of David and the crescents there is no bigotry. There is no prejudice. There is no hatred. And within the sacred confines of their resting place there is no law of “Don’t Ask Don’t Tell.” There is only purest democracy.

When the final cross has been placed in the last cemetery, will it only be then that we as a nation acknowledge our gay brothers and sisters who took the risks of life and truth to answer their nation’s highest calling? How many of these brave men and women lie in military graves and still hide in death?