I was surprised because I had never suspected the soldier of being gay. But then, I never really had any thoughts about her sexual orientation whatsoever.

When I reflected on it, it didn't make one bit of difference in how she performed her job or how she related to the other soldiers in the platoon. She had the respect of her squad leaders (fairly conservative men, mind you), who kept her secret and continued working with her side-by-side for years.

As an officer, I would have been bound by my position to report such “credible information” that would have led to the discharge of a great NCO. I am glad that I was never placed in the position of having to choose between one of my soldiers and enforcing this terrible law, which I feel is unfair and wrong.

Please, Mr. President – at this critical time — do not allow those serving their country to be forced to choose between good, honorable soldiers, and upholding an unfair law.

Please, do not continue to allow gays and lesbians in the service to have to choose between hiding a part of their identity and continuing to serve their country. 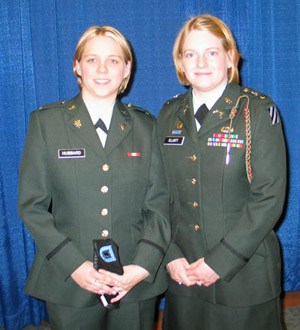 I am the mother of two young children, and an Iraq war veteran. I joined up just like my dad – a retired Army officer – and my sister (pictured), who currently serves in the Guard. My brother is a reservist and has been deployed to both Iraq and Afghanistan. Two weeks ago, our family gathered together as he is leaving again for Afghanistan — his 4th deployment. Even my husband, Jay, served as an officer in the Air Force until 2008.

Like my dad, I chose the Army. I reached the rank of Captain and was a platoon leader in the military police. I was there during the invasion of Iraq in 2003.

I had some of the best NCO's (non-commissioned officers) in the Army who could accomplish any mission. Several members of my platoon received decorations for valor during the combat phase of Operation Iraqi Freedom.

On my last day of active duty, some of my old squad leaders revealed to me that one of my former team leaders was gay. They figured it was safe to tell me, as I was leaving the Army. My first feelings on the matter were, frankly, a little surprised, followed by complete indifference.

Previous Post: « Watch: Christina Aguilera’s Video for ‘Not Myself Tonight’
Next Post: Judge Reduces Charges Against Kentucky Teens Accused of Threatening to Push Lesbian Off Cliff »