I answered honestly. The investigation was now underway.

The 1st Sergeant proceeded to tell me that there was no way he could protect my privacy in the matter, citing the “grapevine,” and having no control over what people within the unit said or did. I was told by my CO to hang tight and wait to hear from the Battalion Commander.

Ultimately I was discharged, a fate I found out only through my persistent calls and emails. My dreams of being an officer had been shattered and it felt as if the world was tumbling down on me and all I could do was step aside.

Upon earning the title of Marine, I took an oath and vowed to “defend the Constitution of the United States against all enemies, foreign and domestic.” This enemy is a domestic one, and with your direction as Commander and Chief, this is a war in which we can be victorious.

“Semper Fidelis” is the Marine Corps motto meaning “Always Faithful.” Not only am I willing and anxious to go overseas, but I am prepared to pay the ultimate sacrifice in order to protect our freedoms. 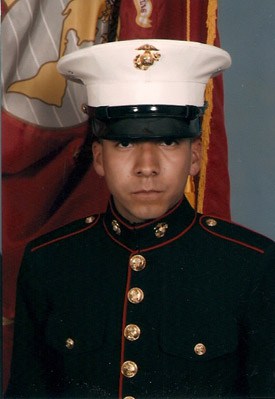 I was humbled to have earned the title of U.S. Marine just two years ago – my goal since I was 14 years old. But just nine weeks ago, I was informed of my discharge under the “Don’t Ask, Don’t Tell” law.

Mr. President, if I could be serving my country right now – I would be. Instead, I was fired while you were my Commander and Chief.

The stories we hear of discharged service members are becoming far too common and are based around a primitive law that we should have eliminated years ago. As this injustice continues to hurt our country, we are in desperate need of your support and leadership as we work to repeal “Don’t Ask, Don’t Tell.”

After I finished my training, I was a 20-year-old reservist. I returned to school to continue working on my undergraduate degree with hopes of becoming an officer. I wish I could tell you about my distinguished service, about stories from the war overseas, or about how being a Marine has changed my perspective on life, but I can’t.

My discharge came from the fear that my sexual orientation was going to be revealed by a third party; a group of unknown Marines who threatened to use my sexuality as a way to retaliate after a dispute in a bar. I had spoken with two fellow Marines from my unit; both of whom I trusted. They calmed me, told me that it wasn’t a big deal, and reassured me that everything was going to be fine.

I returned to drill only to find out that the two Marines – the Marines I confided in — had mentioned it and word had reached my 1st Sergeant and Commanding Officer. They told the two Marines to submit written statements detailing everything I had told them. When I walked in to my 1st Sergeant's office the first question out of his mouth was, "Are you gay?"