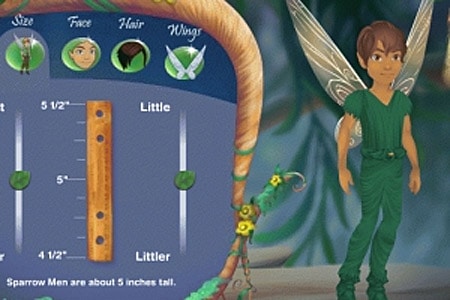 Disney's Pixie Hollow is a popular online site for tween girls. You get to make your own fairy. But until recently, fairies were only female. That is, until a new breed of female popped up which looked suspiciously like a boy:

"…children are pretty resourceful little gender warriors. The open secret around the Hollow has long been that if you make your fairy tall, with short hair, and give her an ambiguous name like Jamie, she can pretty quickly establish a reputation as a he. Hey, Mom and Dad, we've got your rigid gender roles right here.

Why would children go to such lengths to make their Hollow a coed institution? For starters, for the same reason there's a Ken doll. My own 10-year-old got hip to the need for a masculine avatar soon after she created her first feminine one – so that 'Coriander' could escort 'Emma' around. But there are other reasons. Real live boys may be reluctant to admit it in the cafeteria, but plenty of them like Pixie Hollow, too."

The gender-bending has moved Disney to introduce its first male fairy, named Slate. Except, they don't call him a "fairy." God forbid. No, he's the much more masculine "Sparrow man."