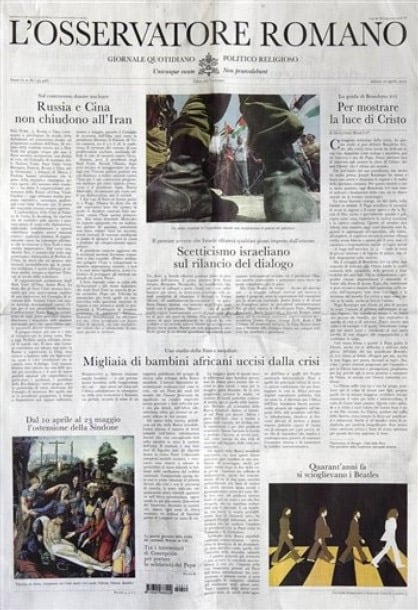 Hoping (and succeeding) to get headlines other than those associated with pedophile priests, the Vatican today forgave the Beatles in a front page article in its official paper, L'Osservatore Romano.

Writes the paper: "It's true, they took drugs; swept up by their success, they lived dissolute and uninhibited lives. They even said they were more famous than Jesus. But, listening to their songs, all of this seems distant and meaningless. Their beautiful melodies, which changed forever pop music and still give us emotions, live on like precious jewels."

The Guardian notes: "The article comes four decades after John Lennon enraged the Catholic church by saying the Beatles were 'more popular than Jesus' and suggesting that Christianity was a dying institution…The timing of its latest effusive piece on the Beatles coincides with mounting focus on the Vatican's response to claims of institutional sexual abuse within the Catholic church. The latest edition of L'Osservatore Romano acknowledged the controversy by saying there was international 'support for the Pope'." 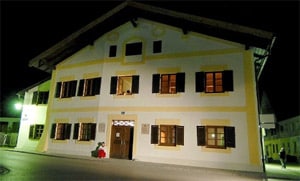 That "international support" is not manifesting itself in the Pope's birthplace, however, where his childhood home was vandalized with graffiti related to the church's child sexual abuse epidemic:

"The house in the Bavarian town of Marktl am Inn where Pope Benedict XVI was born has been vandalised just three days before his 83rd birthday, local authorities reported on Tuesday. A police spokesperson said the words daubed on the house were of “insulting content,” adding that they referred to the child abuse affair that has rocked the Church in Germany in recent months.

Police refused to reveal the exact words painted on the building in blue, which a passerby noticed on Tuesday morning. The words were quickly covered over.

Pope Benedict was born as Joseph Ratzinger on April 16, 1927 in the small community in Upper Bavaria. Tuesday’s incident is the second time his place of birth has been vandalised. During a visit to Bavaria in September 2006 two balloons of blue paint were thrown at the house.

In July 2007 a bust of the pope outside the Traunstein parish church – where he conducted his first mass in 1951 – was covered in red paint.

Germany’s Catholic Church has been embroiled in a crisis over recent weeks as victims of widespread sexual and physical abuse continue to come forward."