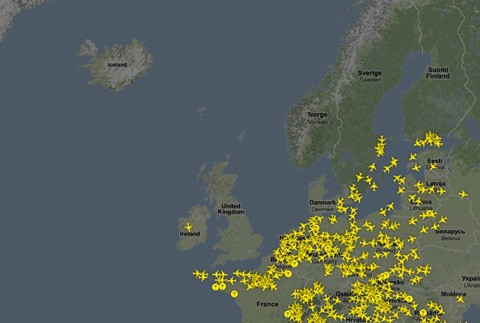 Air traffic in the UK, Norway, and much of Sweden has been closed after an eruption from the Icelandic volcano 10 to 20 times greater than the one last month (video) sent a high-altitude cloud of ash drifting towards France. 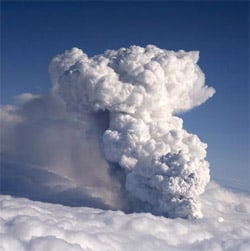 The NYT: "The move effectively grounded all flights in Britain from 11:00 a.m. GMT (7:00 a.m. EDT) and affected the estimated 6,000 flights using British airspace everyday, aviation experts said.The impact was likely to be among the most severe in many years, cutting transatlantic links and severing air routes across northern Europe.The silence of the skies reminded some aviation experts of the days after the attacks of Sept. 11, 2001, when transatlantic flights were suspended. Since then, aviation in Britain has seen huge disruptions caused by terrorism alerts and industrial unrest."

"The eruption under the Eyjafjallajokull glacier – 10 times more powerful than another one nearby last month – showed no sign of abating after more than 24 hours of activity, University of Iceland volcanologist Armannn Hoskuldsson said."It's becoming more intense, but there will be no lava – this is purely an explosive eruption," he told Reuters.To the east of the volcano, thousands of hectares of land were covered by a thick layer of ash, while a cloud was blotting out the sun in some areas along the southern coast of Iceland, local media reported.Hot fumes from the eruption melted vast amounts of ice on the glacier, Iceland's fifth largest, but flood waters which had caused wide damage to roads and bridges on Wednesday were receding, Hoskuldsson said."

New footage, AFTER THE JUMP…