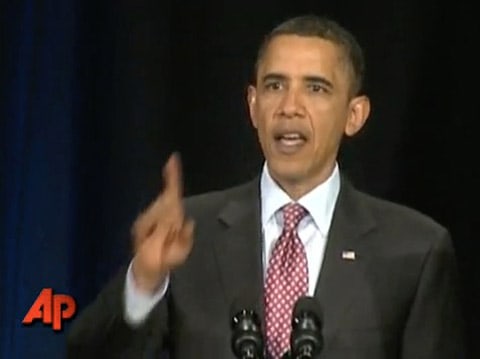 As planned, GetEQUAL protesters got Obama's attention at a fundraiser for Senator Barbara Boxer last night in Los Angeles, heckling the President over "Don't Ask, Don't Tell" and demanding equality for all Americans.

THE PRESIDENT: No, no, no, no, listen. What the young man was talking about was we need to — we need to repeal “Don’t Ask, Don't Tell,” which I agree with and which we have begun to do. (Applause.) But let me say this: When you’ve got an ally like Barbara Boxer and you’ve got an ally like me who are standing for the same thing, then you don't know exactly why you’ve got to holler, because we already hear you, all right? (Applause.) I mean, it would have made more sense to holler that at the people who oppose it. (Applause.)

AUDIENCE MEMBER: It’s time for equality for all Americans!

THE PRESIDENT: I’m sorry, do you want to come up here? (Applause.) You know, the — all right, because can I just say, once again, Barbara and I are supportive of repealing “Don’t Ask, Don’t Tell,” so I don't know why you’re hollering.

Now, the problems that we have here put a further strain on folks in this state, forcing painful choices about where to spend and where to save. And the challenges folks have been facing here —

Two clips, AFTER THE JUMP…