Think Progress notes: "If the video is indeed an accurate portrayal of events, it would appear that the military’s official response to the events is inaccurate and that it has not been telling the truth when it claims that the Apache attack 'occurred after security forces came under fire.' Additionally, it would appear that the Apache pilots in question violated the 2007 U.S. Rules of Engagement for Iraq, which permit the use of 'deadly force' only against individuals who 'pose a threat to Coalition Forces by committing a hostile act or demonstrating hostile intent.'The Wikileaks’ revelation strengthens the case for a thorough and transparent investigation into the events that led to the killing of the Reuters employees and Iraqi civilians." 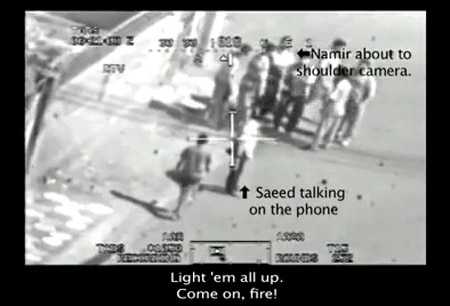 The website Wikileaks held a press conference to unveil a video that Reuters has been trying to obtain through the Freedom of Information Act without success since the time of the incident in 2007. The video purportedly shows the innocent slaughter of two Reuters journalists and several incident civilians.

Writes the group of the video: "Wikileaks has obtained and decrypted this previously unreleased video footage from a US Apache helicopter in 2007. It shows Reuters journalist Namir Noor-Eldeen, driver Saeed Chmagh, and several others as the Apache shoots and kills them in a public square in Eastern Baghdad. They are apparently assumed to be insurgents. After the initial shooting, an unarmed group of adults and children in a minivan arrives on the scene and attempts to transport the wounded. They are fired upon as well. The official statement on this incident initially listed all adults as insurgents and claimed the US military did not know how the deaths ocurred."

The Pentagon is upset about the existence of Wikileaks.

Watch it (warning: graphic), AFTER THE JUMP…