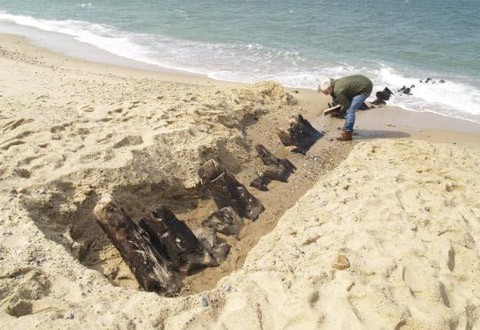 The wreck of the British warship HMS Somerset, which nobody has seen any part of for 37 years, has resurfaced on the beach in Provincetown after erosion from recent storms:

"Federal park officials, saying they may have only a limited window of opportunity, are seizing the moment and having the wreck 'digitally preserved' using three-dimensional imaging technology…The Somerset fought in the American Revolution and had a crew of more than 400. In 1775, Paul Revere slipped past the ship before beginning his ride to Lexington to warn the colonials that the British were on the move. In his poem 'Paul Revere’s Ride,' Henry Wadsworth Longfellow called it 'a phantom ship, with each mast and spar/Across the moon like a prison bar.' The ship sank on Nov. 2, 1778, off the Cape."

Previous Post: « Elizabeth Taylor is Not Getting Married for the 9th Time
Next Post: ‘Straight Pride’ T-Shirts on Sale at Michigan Tea Party Rally »