President after President have treated us so badly. Ronald Reagan. George Bush the first. Bill Clinton. George Bush the second. Barack Obama. They have all treated us like… shit. Like little pieces of shit that they can step on with their heels and grind into the ground. Obama is treating us just like that. Like little pieces of shit he can grind into the dirt with his heel to make us go away. I wish you could see that. I wish you could see what he is doing to us for for what it is. He is manipulating us into invisibility. He HAS manipulated us into invisibility. Our people in Washington live in a never-never cloud cuckoo-land, thinking that this man likes us, not responding as, little by little, he take bits and pieces of us away. That is how they control us. Can’t you see that? Why can’t our people in Washington see that? They give them a dinner as they take away another right.

How long are we going to allow ourselves to be treated with such disdain, to be cast way in such an unwanted and disposable and ignoble fashion?

We forget what miracles we once were able to accomplish. Every single treatment for HIV/AIDS is out there because of us. If they are out there because of us, why can’t all the people waiting for Ryan White meds get them? Why can’t over 90% of the rest of the world get them? We did not fight for them just for ourselves. So many dead young men fought as activists for those drugs to save the world and this Obama will not let them save the world. Little by little he takes away our Ryan White drugs in America and our PEPFAR drugs for the rest of the world and our AIDS organizations and clinics everywhere so he can grind even more people with his heel into the earth like little helpless smelly pieces of shit. Yes, this man, like all his rotten hateful predecessors treats us like shit.

I am so tired of being treated like shit.

I wish you could realize that my words and my language and my vocabulary are not too strong. They are not strong enough!

I beg of us all. Re-assemble! Re-unite! Fight back once more with the passion and honor and truth and unity and brotherhood as we once did. We once accomplished miracles. Why do we not recall our glorious fights and build anew upon them? They treat us like shit because we let them treat us like shit. When will we get that into our heads and hearts and fight back?

How effective and fierce and unstoppable we can be when we take action together. The only reason we got those drugs is because of direct action, mobilization, fighting back. That is the reality of what we have been able to accomplish. We are alive, for those of us who are still alive, because we saved ourselves! When we fought back rudely and together, we were able to achieve miraculous victories. I take these victories, as do many of you, every morning with my breakfast.This Obama president made a commitment to ensure that America does its fair share to fight AIDS, in Africa, in America, and around the world. He has broken that promise. He, like Clinton, has lied to us. He does not like us, this president, as the other presidents did not like us. We are not a part of their American People. He does not want us to get married, he does not want us to fight for our country, he does not want to end the plague of AIDS.

We must have the presence of mind and the force of character to insist that he and his society are wrong and we are right. 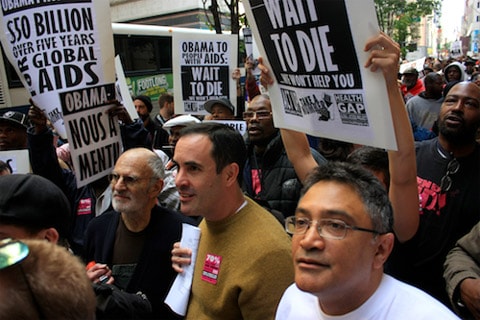 President Obama faced a massive protest outside a fundraiser for the Democratic Congressional Campaign Committee at the St. Regis hotel in New York last night, over broken promises on AIDS funding. Eight activists were arrested. 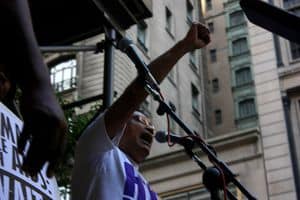 Housing Works has a big report:

"In addition to those arrested, 500 protesters from around the world chanted and marched holding signs reading “No More AIDS Lies! Treat People Now!” and carrying body bags.'While they are inside sipping champagne and caviar, Obama’s broken promises for global AIDS funding mean people will die because they cannot afford a ‘cocktail’ of HIV/AIDS medication,' said ACT UP Philadelphia member Henry Bennett. 'Obama gave them hope, then he took it away…'

…This protest was viewed as urgent by AIDS activists, who see the Obama administration back-tracking on promises to fight global AIDS, just when the world is making real progress against the epidemic. One of the largest AIDS protests in recent memory, last night’s demonstration brought out longtime activists who are no longer protest regulars, including ACT UP founder Larry Kramer and South Africa’s Treatment Action Campaign’s Zackie Achmat.'I’m here because this is a tragedy,' Achmat said at the rally that preceded the arrests. 'When he was campaigning, President Obama met with us. He learned that PEPFAR saves lives. But did he come just to get his picture taken or to listen to us?'" 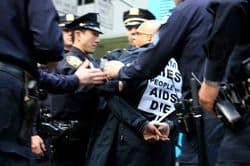 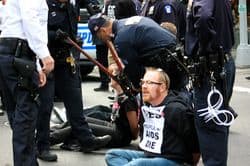 Said Kramer, in his remarks, which he sent out to some media, including Towleroad: 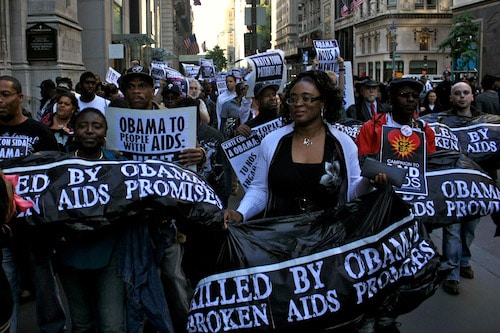