The Cannes Film Festival is getting its first LGBT award: 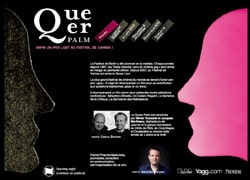 "Cannes is getting its first (unofficial) GLBT award. Following on awards such as the Teddy at Berlin and the Queer Lion at Venice, an independent group is establishing the Queer Palm.

The first Queer Palm, recognising a film for its contribution to lesbian, gay, bisexual or transgender themes, will be handed out May 22. The films will be drawn from all Cannes sections: Official Selection, Un Certain Regard, Critics’ Week, and Director’s Fortnight.

French directors Olivier Ducastel and Jacques Martineau are patrons of the award."

Here is the website for the Queer Palm award.