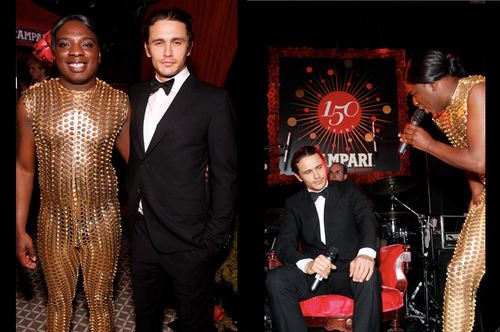 Performance artist Kalup Linzy and James Franco made a splash on Sunday night at an event celebrating the 150th anniversary of Campari.

NY Mag reports: "the highlight was supposed to be drag-ish performance artist and Guggenheim fellow Kalup Linzy, who came out onto the makeshift stage in what appeared to be a studded gold lamé wetsuit — bare-armed, barefoot, with a flower in his hair, singing gorgeously before a six-piece band. A couple of songs in, after the Voguers did their mirroring strut, Franco got up in a tuxedo, his hair slicked back, looking a little like Christian Bale in American Psycho: assessing, aloof, addled. Plopped onto a red velour wing chair in the middle of the small stage, clutching a microphone, his role in the performance was to stare with arrogant fascination at Linzy's ample ass, as the singer performed torch songs about bad men. Franco looked sleek, game, and sincerely confused, and sang badly on their duet, which was Nicolette Larson's 'Lotta Love.' Much of the crowd didn't seem to know who he was."