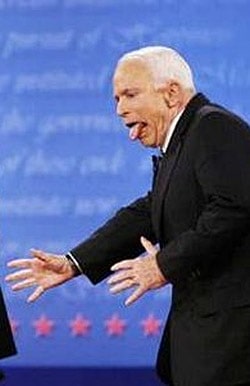 "McCain, the ranking member of the Senate Armed Services Committee, said he welcomed a review of the military's prohibition on openly gay and lesbian servicemembers, but was chilly toward a deal struck by congressional Democrats and the White House on a roadmap to abolish the policy.

'This 'Don't ask, don't tell' issue, they're going to try to jam that through without even trying to figure out what the impact on battle effectiveness would be,' McCain said on KBLU radio in Arizona. ..The deal would allow Obama to move forward with his process to do away with 'Don't ask, don't tell,' while still bowing toward concerns from centrists in Congress and some members of his administration that repealing the policy would negatively impact the military.

'We have to be careful to make any changes to it, because we're in two wars,' McCain said.

The Arizona Republican, who's also fending off a conservative primary challenger, also asserted that the push forward with this deal is driven by fears that Democrats might lose the votes to repeal the policy in this fall's elections.

'One of the reasons they're trying to jam it through is that they think that after the November elections, they may not have the votes,' he said."

Why isn't the mainstream media talking about McCain's gay campaign manager Mark Buse, a man the senator would gladly discriminate against?

Previous Post: « CIA Debated Creating Gay Sex Tape of Saddam Hussein to Discredit Him in the Eyes of His People
Next Post: Watch: Jake Gyllenhaal Behaves Himself in Russian Bathhouses »