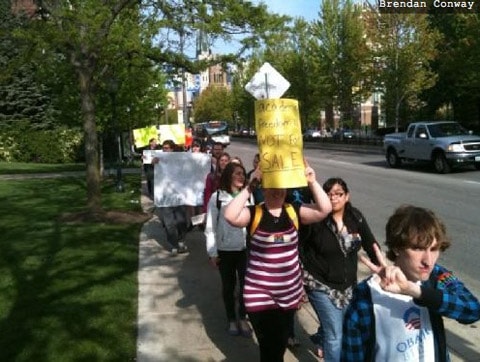 Students and some professors at Marquette University protested the school's decision to withdraw a job offer as dean of one of its colleges from sociologist and Seattle University professor Jodi O'Brien, allegedly after it learned she was a lesbian, WISN reports: 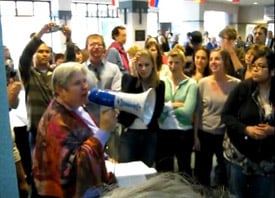 "She told 12 News Reporter Brendan Conway she accepted the job to become Dean of Marquette's College of Arts and Sciences but she said Marquette President Father Robert Wild stepped in before it could be made public.'I'm stunned and disappointed,' O'Brien said. 'The College of Arts and Sciences at Marquette is strong and vibrant, and I was looking forward to working with the students and faculty there.'Hundreds of students chanted and carried signs outside the university's annual faculty dinner to protest the decision.A group of students and professors say the school was scared off because O'Brien is a lesbian and she wrote some academic articles years ago about gay marriage and sex."

The NYT reports: "The Rev. Robert A. Wild, the Marquette president, denied in an interview that the decision to revoke the offer was based on the candidate’s sexual orientation. Instead, Father Wild said, the decision came after he and other university leaders read academic writings by the candidate.'We found some strongly negative statements about marriage and family,' Father Wild said.Dr. O’Brien’s 12-page curriculum vitae includes many articles and book chapters on topics like 'Queer Christian Identities,' 'Queer Christian Social Movements' and same-sex marriage."

Watch Professor Nancy Snow condemn the school's decision at a rally, AFTER THE JUMP…

Previous Post: « Speculation in Spain as Barcelona Footballers Zlatan Ibrahimovic and Gerard Pique are Photographed Having Intimate Moment
Next Post: Obama to Nominate Elena Kagan to SCOTUS on Monday? »