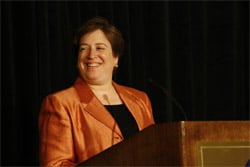 "Look for President Obama to name his Supreme Court pick Monday, and look for it to be Solicitor General Elena Kagan, a former Harvard Law dean. The pick isn’t official, but top White House aides will be shocked if it’s otherwise. Kagan’s relative youth (50) is a huge asset for the lifetime post. And President Obama considers her to be a persuasive, fearless advocate who would serve as an intellectual counterweight to Chief Justice Roberts and Justice Scalia, and could lure swing Justice Kennedy into some coalitions The West Wing may leak the pick to AP’s Ben Feller on the later side Sunday, then confirm it for others for morning editions. For now, aides say POTUS hasn’t decided, to their knowledge."