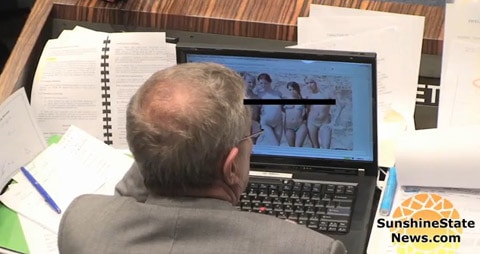 Florida Republican state senator Mike Bennett got caught checking out a photo of some topless sexy ladies while debate was underway in the chamber.

The Sunshine State News reports: "Bennett defended his actions, telling Sunshine State News it was an email sent to him by a woman 'who happens to be a former court administrator.'  … 'I was just sitting there, bored as they were debating the abortion bill,' Bennett said.'I opened it up and said holy [expletive]! What's on my screen? and clicked away from it right away.'Sunshine State News could not verify how long the image of four bikini-clad women with their tops exposed was open before our cameras started rolling on it, but it was up for at least three seconds before it disappeared from the screen."

The senate was debating an abortion bill at the time. Ironically, Senator Dan Gelber's voice can be heard over the clip of Bennett saying, "I'm against this bill, because it disrespects too many women in the state of Florida."