BP says a new oil siphon tube is collecting over one-fifth of the oil gushing out of the leaking Deepwater Horizon well:

"Speaking Monday on NBC's "Today" show, Suttles said the tube has been siphoning more than 1,000 barrels a day, or 42,000 gallons. BP has estimated about 5,000 barrels a day, or 210,000 gallons a day, has been leaking out.He says they hope to be able to collect more oil as they ramp up the effort but they won't be able to get all of it.After weeks of failed solutions, BP PLC crews on Sunday hooked up the tube to funnel the crude into a tanker ship. However, millions of gallons of crude are already in the Gulf."

The WSJ notes the limited progress:

"Back in Houston, the risk that the tube operation could fail remained high. No one has attempted anything like it at such depths. Earlier, BP suffered a blow when a massive dome it planned to lower onto the leak had to be abandoned after it became blocked by hydrates.The tube operation itself wasn't plain sailing. It was initially inserted Saturday night in what Mr. Lynch describes as a "gut-wrenching" procedure with very poor visibility. The operation seemed to be a success and gas collected at the surface was burnt. But then one of the subsea robots—notorious among engineers for their poor peripheral vision—collided with the pipework and the pipe got dislodged. The whole operation had to be started again."

The NYT reported over the weekend that massive oil plumes, "one as large as 10 miles long, 3 miles wide and 300 feet thick in spots," are forming far below the surface:

"The plumes are depleting the oxygen dissolved in the gulf, worrying scientists, who fear that the oxygen level could eventually fall so low as to kill off much of the sea life near the plumes.Dr. Joye said the oxygen had already dropped 30 percent near some of the plumes in the month that the broken oil well had been flowing. 'If you keep those kinds of rates up, you could draw the oxygen down to very low levels that are dangerous to animals in a couple of months,' she said Saturday. 'That is alarming.'" 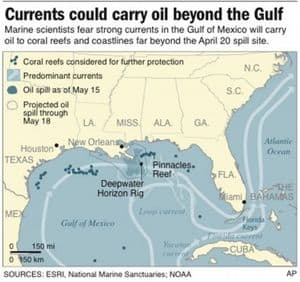 And some are concerned that the oil could be reaching a major current that would take it around Florida and up the East Coast:

"A researcher told The Associated Press that computer models show the oil may have already seeped into a powerful water stream known as the loop current, which could propel it into the Atlantic Ocean. A boat is being sent later this week to collect samples and learn more.'This can't be passed off as 'it's not going to be a problem,'' said William Hogarth, dean of the University of South Florida's College of Marine Science. 'This is a very sensitive area. We are concerned with what happens in the Florida Keys.'"

60 Minutes did a major two-part segment on BP and the Gulf spill.