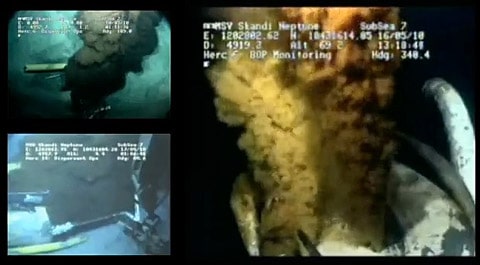 There are still far more questions than answers about the scope and the containment of the oil leak that is still violently gushing thousands of gallons of oil daily into the Gulf of Mexico.

I think we can say good-bye to the Kemp's ridley sea turtle. 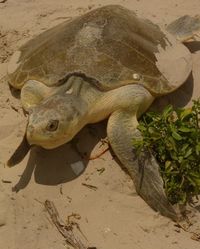 The ongoing lack of understanding about the scope of the disaster is terrifying:

"With fears growing that the gushing well could spread damage from Louisiana to Florida, Interior Secretary Ken Salazar told a Senate panel Tuesday that his agency had been lax in overseeing offshore activities and that may have contributed to the disastrous spill.'There will be tremendous lessons to be learned here,' Salazar said in his first appearance before Congress since the April 20 blowout and explosion on the Deepwater Horizon rig that killed 11 people.Coast Guard Adm. Thad Allen told another committee that the growing size and scattershot nature of the spill were creating 'severe challenges' in containing it and cleaning it up. He called it more complicated than any spill he's ever seen.'What we're basically trying to do is protect the whole coast at one time,' Allen said."

In sort of good news, the tar balls that were found near Key West have been analyzed and are not from the Gulf spill.

Obama expressed disappointment that a measure to put no limits on oil companies' liabilities in disasters stalled in the Senate:

"I am disappointed that an effort to ensure that oil companies pay fully for disasters they cause has stalled in the United States Senate on a partisan basis. This maneuver threatens to leave taxpayers, rather than the oil companies, on the hook for future disasters like the BP oil spill. I urge the Senate Republicans to stop playing special interest politics and join in a bipartisan effort to protect taxpayers and demand accountability from the oil companies.”

They still don't know how much oil exactly is gushing, but from the looks of a new video, it's a hell of a lot.