Wow — so much wrong here: 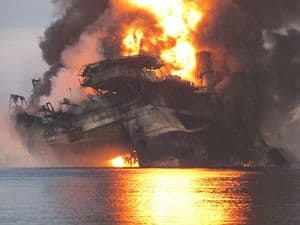 "Transocean Ltd., the owner of the rig leased by BP which is currently leaking oil into the Gulf of Mexico, made a $270 million profit from insurance payouts after the disaster, the Sunday Times reports.

The amount, revealed during a conference call to analysts, was made because its insurance policy for Deepwater Horizon rig was greater than the value of the rig itself, the paper reports. The Times says Transocean has already received cash payment of $401 million and the rest is due in the coming weeks.

Transocean said the cost of the cleanup from the leaking rig must be covered by BP and two smaller partners, Anadarko Petroleum and Mitsui of Japan, the paper says."