Are they really that stupid?

Well, true reality TV famewhores have no fear when it comes to these things: 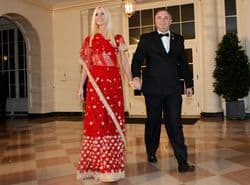 "The Salahis were stopped by the U.S. Secret Service last night at around 8 p.m. ET during the State Dinner for Mexican President Felipe Calderon as their stretch limousine ran a red light and seemed to be trying to turn into a restricted area near the White House, ABC News has learned.

Apparently they were dressed in a white mink coat and a suit.

The Caucus reports that they were spotted later having dinner at a nearby restaurant. It's unclear, however, why they tried to turn into the restricted area by the White House.

The Salahis were cast on The Real Housewives of D.C.