It was the fall semester of my final year of medical school. I was forced to make a life-altering decision. For nearly two years, I had been stalked. My home had been broken into and I had received credible threats to be outed by a civilian with no attachment to the military. I had to take control of the situation for my safety, for my sanity, and to protect my honorable service record.

The hardest call I ever had to make was to my mentor. I was ashamed to have let him down and to have wasted his efforts in molding my career. I felt like I had to apologize for breathing the same air as the rest of the world. I was devastated that I couldn’t continue to be part of the air force family who’d raised me and counted on me.

My mentor was gracious and kind. He didn’t care that I was a lesbian and considered it a mistake to let me go. He assured me that I would only disappoint him if I didn’t use all I’d been given to make a difference in this world.

I have done my best. I have supported two of my step children as they made their way from West Point to Iraq. I have cared for the sick and injured children of my community as they arrive in the emergency department.

But it will never be the same as the best I could have given in uniform. Every day my country is at war, I think about my military family; I am not there for them. Every day, I am reminded that, simply because of who I love, my country has said I’m not good enough to help save the lives of our women and men in uniform. 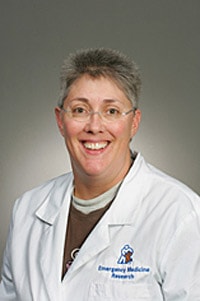 On the morning of Tuesday, September 11th, 2001, I was monitoring the events unfolding in New York City while tending to patients in the Emergency Department at Duke University Medical Center. The leadership of the department was activating our disaster plan to accept as many patients as possible from the New York area. All too quickly, it became evident that there would be no need for our hospital to activate.

I knew that brutal attack would not go unanswered. I knew my leadership and medical skills soon would be needed to care for those who would be sent into harm’s way. Naively, I thought that mission needs would trump my being a lesbian, but a few weeks later, I received a notice in the mail. It was signed on September 10th, 2001 by the Secretary of the Air Force. I was discharged.

My military career was over.

I was a proud member of the tenth class of women to graduate from the United States Air Force Academy. I graduated in the top 15 percent of my class and was named Academic All-American/All-American in women’s golf. I entered active duty service as an acquisition officer and just three years later, was selected to the commanding general’s staff while only a first lieutenant.

With the encouragement of my mentor, the future Air Force Surgeon General, I applied and was accepted to medical school on a military scholarship. Before I left for medical school, I was honored by two retired women general officers – each gave me one of their stars and told me they planned to be there to provide the match to the pair.

While in medical school, I fell in love with my best friend. While most people are thrilled to have found their true love, their soul mate, I agonized over it. That’s because my friend, my love, and my soul mate was a woman.