Here are the latest reports on the meetings toward brokering a compromise on "Don't Ask, Don't Tell" between the White House, gay advocates, and lawmakers.

MetroWeekly reported earlier that three leading lawmakers on DADT sent a letter to the White House seeking the administration's official views on any proposed repeal plan:

"The three members of Congress who have taken the lead on DADT repeal – Sens. Carl Levin (D-Mich.) and Joseph Lieberman (I-Conn.) and Rep. Patrick Murphy (D-Penn.) – have written a letter, obtained by Metro Weekly, dated May 24, to President Obama seeking 'the Administration's official views' on 'a legislative proposal.' and language in a repeal amendment."

The letter is posted at MetroWeekly.

The White House Director of the Office of Management and Budget Peter Orzsag responded this evening, signing off on plans for Congress to effectively attempt repeal of DADT later this week, according to a copy of a letter to Senator Joseph Lieberman received by Towleroad.

Says the endorsement, in part:

And here is
the repeal Amendment (PDF).

The Palm Center released a statement in response to the compromise:

“The President’s statement today keeps his promise to lift the ban by establishing the terms on which ‘don’t ask, don’t tell’ will be dismantled,” stated Aaron Belkin, Palm Center Director. “For the past seventeen years, every expert who has studied this policy has emphasized that dismantling it would require leadership. Leadership is what the President showed today.”

The AP reports much of what we learned earlier from Kerry Eleveld:

"Under the proposal emerging from talks at the White House, Congress would remove the Clinton-era "don't ask, don't tell" law even as the Pentagon continues an ongoing review of the system. Implementation of policy for gays serving openly would still require the approval of President Barack Obama, Defense Secretary Robert Gates and the chairman of the Joint Chiefs of Staff, Adm. Mike Mullen. How long implementation might take was not known.
Activists met at the White House through the day with administration officials who are trying to broker a compromise. Policy aides to Democratic leaders met Monday morning to discuss the potential deal and top Democratic lawmakers planned to meet Monday evening on Capitol Hill.
Hoping to secure those votes, Democrats described a compromise that would add the repeal to the annual defense spending bill but delay its implementation until after the Pentagon completes its study."

Chris Johnson at the Washington Blade asked Robert Gibbs earlier whether the White House would support the efforts to repeal the measure this week.

Said Gibbs: "I’ve seen some of the reports – I’ve not seen what exactly is being discussed. Obviously, it’s likely that Congress is going to act this week. If they decide to do that, we’ll certainly examine what those efforts are…" 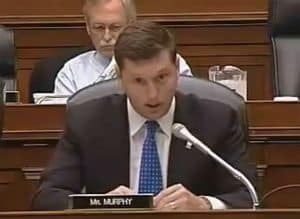 Politico has more, and says that Thursday is when we should see action in Congress:

The White House and the Pentagon are remaining quiet about details of a possible compromise. And a congressional aide said that, although discussions were “promising,” it was too soon to characterize them as any sort of “deal.”

“Given that Congress insists on addressing this issue this week, we are trying to gain a better understanding of the legislative proposals they will be considering,” said Pentagon spokesman Geoff Morrell.

Congressional action on the issue is expected in both the House and Senate on Thursday. In the House, Rep. Patrick Murphy (D-Pa.) is set to offer an amendment to the defense authorization bill approved last week by the House Armed Services Committee.

In related news, Senator Mark Udall has launched an emergency petition that he will be taking to the mark-up session of the Senate Armed Services Committee. You can sign it here.