One day, I received an email from a Soldier I had never met; it said I was being investigated under DADT and that I would be stripped of my rank and pay and eventually discharged. I tried to ignore it, but the emails continued and became more derogatory. Soon, I began receiving similar phone calls at work.

Unsure of who to trust, on edge every second, and losing more and more sleep each night, I approached my supervisor. I was a Soldier who lived by all seven of the Army values, including honesty. I refused to have someone else end my career. He offered a sympathetic ear before reporting me to the legal department.

After an investigation into my statements and the harassment, I was told I was an exceptional Soldier and to “drive on” with my work. It was a great a relief to break the silence. My colleagues suddenly understood why I had always been so detached and began asking me to join them in activities outside of work.

Later that year my division deployed again and I served the entirety of the deployment as an openly gay Soldier. I no longer had to lie if someone asked if I were married or had a girlfriend, I didn’t have to write my emails in “code.” I no longer feared being “outed.” I finally was able to be honest.

After arriving in Iraq for the second deployment I was promoted once again and served my division as the medical liaison officer in Kuwait. It was there that I participated in an interview with Leslie Stahl for 60 Minutes with the focus being on a out gay Soldier working in a combat zone.

I gave voice to the tens of thousands of men and women who serve everyday under the fear of DADT. The interview also ended my career. I was honorably discharged on June 10, 2008.

While I sit in a safe and comfortable civilian office, former comrades and friends continue to serve, leaving their families for a third, fourth, or even fifth deployment. Why am I not able to stand in the place of my battle buddy who has left his wife three times to deploy and missed the birth of his new born child? Why are exceptions being made to enlist individuals with subpar mental and physical standards? And why are serious convicted felons granted waivers to serve while I was pushed out the door?

Mr. President, last year you restored my hope that this discriminatory law will be repealed, but I must admit that my spirit has been shaken because DADT still exists. Every day, we lose dedicated and capable service members while other Marines, Soldiers, Sailors, Airmen and Coastguardsmen sacrifice more than their share. My experience demonstrates what matters most is competence, trust and ability. Why then should we wait another year or another decade to do what is right? 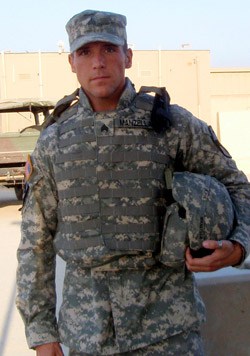 It was spring 2004. I had just arrived in Baghdad. We’d been there all but four days. Then it happened. It was an ambush. It ended with my good friend shot dead. I was overwhelmed by emotions of anger and sadness, but also confusion.

At that moment, my perspective on life changed; I wondered, what if I had been killed in action and had never come to terms with who I truly was and, even worse, never had the chance to share it with my loved ones? There comes a point when acceptance is your only salvation—my return from Iraq was my moment.

I served two tours of duty in the Middle East in support of Operation Iraqi Freedom as a Soldier in the United States Army. I was promoted to sergeant, was a team leader of a medical squad, and conducted over 100 12-hour patrols in the streets of Baghdad, treating wounds and evacuating casualties of sniper fire and roadside bombs. I applied for Officer Candidate School under the recommendation of two generals in my chain of command. But, today, instead of protecting my fellow Americans, I sit working in a university development office because I was discharged under “Don’t Ask, Don’t Tell” (DADT).

When I came out, the first people I told were comrades, with whom I had just spent 12 months in Baghdad. To be honest, I was scared of their rejection more than the mortar and rocket attacks, ambushes, or roadside explosives. But, they showed immense understanding of what I had been going through and offered unconditional support. The response from my brothers and sisters in arms proved that the military is a family—no matter if you are man, woman, black, white, transgender, gay, or straight. What truly matters is whether you can trust the person next to you. And how can trust be built around a lie?