I was lucky, though. I did not get kicked out, but that does not mean that DADT didn’t affect me. The uncertainty and fear of knowing that anyone with a grudge could end my career, and the sadness in realizing that at any time my country could callously discard me for no other reason than the fact that I was gay, pressured me to give up the career I loved. I chose not to reenlist.

There are days when it is hard for me not to walk into the nearest recruiting station and sign back up. I watch what is happening in Iraq and Afghanistan and it's hard for me to think about not being there with the men and women I served with in the first Gulf War. I have to remind myself why I chose not to reenlist.

Defending our country in uniform is one of the greatest privileges and responsibilities of being an American. Many people do not appreciate that; many take our freedoms for granted; and many do not choose to serve. We cannot afford to lose those who want to serve, who have the necessary skills and work ethic, and who would risk their lives for their comrades and their country.

Mr. President, in your State of the Union Address, you said that the American people are not quitters. I did not quit on my country during the first Gulf War and I would serve again if called. There are at least 66,000 gays and lesbians serving right now who do not want to quit, either. Mr. President, please don’t quit on them. Please do everything in your power to end DADT this year. We are counting on you. 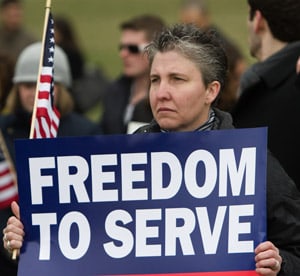 I am a proud Army veteran of the first Gulf War. You won't find anyone who loves this country more. I get chills and teary eyes, every time I hear the Pledge of Allegiance or The Star Spangled Banner. I've been known to call a business when I see them flying a tattered flag to let them know that if that's all the pride they have in the American flag, they should just take it down. I am also a proud lesbian.

I joined the military in 1989, before “Don’t Ask, Don’t Tell” (DADT) was enacted and when there was an outright ban on gays and lesbians in the military. I did not realize at the time that I was a lesbian, but later, when I did come to terms with my being gay, I never tried to hide it, but I did not flaunt it either.

My sexual orientation was a non-issue. I was a hard charging soldier, promoted long before my peers. I am sure there was talk behind my back about me being a lesbian, but no one ever seemed to care. I was a good friend, soldier, and leader; everyone I encountered could have cared less about what happened in my private life. After DADT was passed, I started to hear stories about people being discharged. I struggled with this every day, always fearful that I would be next.

Eventually, the stress of constant fear that I could lose my job no matter how hard I worked or how well I performed, became too much. I knew from the stories of others that even serving to the very best of my ability could cost me my job. I knew that an anonymous tip—by someone who was jealous of my success, angry with me because of a disagreement, or mad because I rebuffed a sexual advance—could trigger a demoralizing, demeaning investigation under DADT. And if I was not willing to lie, I knew an investigation could lead to my discharge.