At that time, as well as other times during my military service, I had seen friends discharged under DADT who were in similar situations. My friends were discharged, while their perpetrators were given a slap on the wrist.

The signal from command was clear: being gay was a far more serious offense in the military than sexually harassing a fellow service member. I ultimately chose what I believed was the best decision for me at the time. I let these men have their way with me in exchange for their silence.

I am not proud of what I did, but I loved my job too much to let it destroy my career before it had even started.

My decision didn’t come without consequences. I was eventually diagnosed with an STD which could potentially lead to cervical cancer later in life.

I, frankly, am still ashamed of what I had to do to stay in the Army. I wasn’t discharged under DADT, but left because of it. I continue to attend counseling sessions provided by the Department of Veterans Affairs for what I went through. The memories still come back to haunt me some 16 years later.

I don't want to see other service members go through what I went through. And unfortunately, this will continue to happen as long as DADT is law.

As long as a recruit or military member meets or exceeds the criteria for military service, let them serve. A bullet doesn’t discriminate because of a person’s race, gender identity, sex, religion, or sexual orientation, so why does the U.S. military continue to do so?

The time to repeal DADT is long overdue. Please, Mr. President, do the right thing. 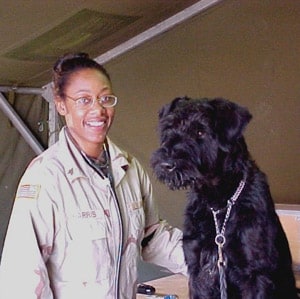 My name is Tracey Cooper-Harris. I served in the Army for 12 years, reaching the rank of Sergeant. As a soldier and a non-commissioned officer (NCO), I performed my duties with honor and distinction. I was lauded by my peers and superiors for going above and beyond the status quo to complete the mission.

I lived in constant fear serving under “Don’t Ask, Don’t Tell.” I was always looking over my shoulder, censoring what I said and keeping as much physical distance as possible between my military life and my personal life.

Even with this vigilance, I was found out by some male “friends” at my first duty assignment. I was just 19 years old. The deal was simple: Perform sexual favors and my secret was safe.

I had a choice: report these men for “sexual harassment/cohesion” and end my military career or submit to their demands.

Despite the military’s “zero tolerance” policy on sexual harassment, it doesn’t apply to those forced in the closet under DADT. I was sexually blackmailed and just a teenager.