Students at a school in British Columbia feel that homophobia from parents and the school district is behind the decision to cancel or reschedule several events aimed at promoting tolerance, so they've decided to cross-dress on Friday in protest: 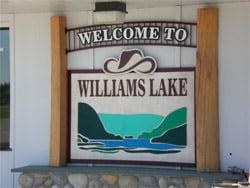 "Three events, including a 'gender bender day' on Friday, were rescheduled or cancelled after some parents complained the week-long slate of events conflicted with class time.

But organizer Lexi Saffel, a Grade 12 student and president of the Williams Lake Gay Straight Alliance, wasn't buying it.

'I'm very angry. I feel that homophobia is the driving issue behind the parents' complaints,' she said.

The school moved two other events — an assembly on Monday and an anti-homophobia walk set for today — to the lunch hour, forcing organizers to cancel them due to time constraints.

Saffel said the school has assemblies that cut into class time 'all the time,' but 'as soon as we mentioned LGBT [lesbian, gay, bisexual and transgender] issues, the parents were on it.'

Jolene Veitch, another member of the group, said they've been planning the event for months with the knowledge and support of the school. On Friday, they were told some of the events were in jeopardy because they promoted 'gayness.'"