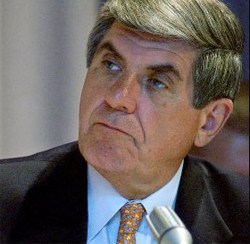 "Asked whether he would vote in favor of a repeal measure, Nelson replied, 'No, I want to follow with the advice and the suggestions of Secretary of Defense Gates to have the study that is underway right now before we make that final decision — because it’s not a question of ‘whether,’ it’s a question of ‘how.’'

A vote on repealing 'Don’t Ask, Don’t Tell' as part of major defense budget legislation could take place next week during the Senate Armed Services Committee markup of the fiscal year 2011 defense authorization bill. Markup proceedings are scheduled to begin May 26 and are closed to the public.

It remains unclear whether there are enough votes on the committee to make repeal part of the legislation. Mustering enough votes to repeal the statute could be a challenge for opponents of 'Don’t Ask, Don’t Tell,' following Nelson’s comments."

Nelson was not aware of a plan currently being strategized to vote for repeal now, but hold off on implementation until the military study is complete, but said that even if presented with such a plan he would stick with Gates' request.

"He was among six senators that LGBT organizations, including the Human Rights Campaign, had lobbied through a grassroots campaign to vote in favor of repeal. The other five are Sens. Evan Bayh (D-Ind.), Robert Byrd (D-W.Va.), Scott Brown (R-Mass.), Bill Nelson (D-Fla.), and Jim Webb (D-Va.)."

Since Gates appears to be running the show, rather than the President, we may be in some trouble here.