What's Black And White And Racist All Over? - Towleroad Gay News 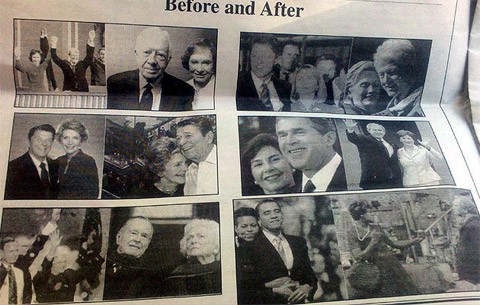 Smithtown, NY paper The Messenger issued regrets for offending anyone after it published a photo editorial featuring before and after photos of First Couples in the White House showing the toll the presidency takes on them physically.

When it came time to show the Obamas, the "after" photo the paper printed was of Fred Sanford and Aunt Esther from Sanford & Son duking it out.

Wrote the paper: "The publisher of the Smithtown Messenger regret [sic!] any offense taken by our readers at the photographic political satire depicting the current and past presidents on the editorial page in the April 29th, 2010 issue. While we have grave disagreement with the policies of the current Administration, we hold the office of President of the United States in great respect."

Previous Post: « Fred Phelps Was a ‘Brilliant’ Civil Rights Lawyer Before He Started Hating Gays for a Living
Next Post: Court Evacuated Near End of Oral Arguments in DOMA Case »