You may recall that earlier this week Rep. Ike Skelton expressed his opposition to repealing "Don't Ask, Don't Tell" because, he said, it would harm families who would then be forced to discuss homosexuality with their children.

Asked Skelton: "What do mommies and daddies say to their 7-year-old child?" 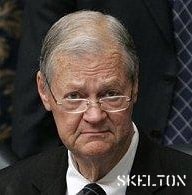 I reported this morning that Skelton was to be the target of a protest today for those remarks. He was, and I should have a report on that later. As part of that protest, by GetEQUAL and Missouri LGBT activist groups, a letter was read to Rep. Skelton from a gay, Missouri soldier who is currently on active duty In Baghdad and facing discharge under the 'Don't Ask, Don't Tell' law. The letter calls for the Armed Services Chairman to stop his efforts trying to thwart any attempt at progress toward the repeal of 'Don't Ask, Don't Tell'.

It was in Ray County, Missouri that I first decided that I would join the Army. I was sitting on the pond dock at my fathers’ home, and came to the realization that my life was not heading anywhere that I wanted it to. I had no way to pay for college, and it seemed I would be stuck in that town not amounting to much. I went and spoke with a recruiter in Liberty, Missouri and eleven days later I was sitting at Fort Sill, Oklahoma.

Nearly four years later, I do not regret that decision. I am now sitting in Baghdad preparing to redeploy back to the United States for a second, and final time. I can honestly say I am proud of the work we have done here. I look at the Iraqis that I personally helped train as a member of the Military Transition Team and can rest assured that we are leaving the area in capable hands. Through serving the country in the United States Army I have become more patriotic than I knew possible.

However, my pride in the Army and what we stand for has been yanked away. One of the first lessons that I learned after joining the Army was the importance of Integrity. I have served our great country honorably in two deployments. I have earned eight awards and have a clean record. I was one of the first responders to Muqdadiyah in 2007 when then President Bush ordered the surge, where my unit spent fifteen months in various provinces. I returned again nine months ago to finish what we started and am proud to be a member of the last combat brigade operating in theatre.

Although my record is untarnished, there is one thing separating myself and the rest of ‘America’s hero’s.’ Though I have less than a year left before my contract has been served, I was informed that the Army is considering discharging me under the “Don’t Ask, Don’t Tell” law, and this hurts extensively. My command realizes and respects the efforts and contributions to my unit and the fact that we are low-manned. It seems that they are holding out as long as they can on my discharge process, waiting for “Don’t Ask, Don’t Tell” to be repealed.

I can understand if your views are against gay and lesbians in general, but sir you must realize your unique role in the United States. Were it not for uncomfortable truths there would be no need for you at all. As a representative of the State of Missouri and a leader in Congress’ role pertaining to the Military, it is imperative that you not succumb to weak leadership. However, I find it disturbingly necessary to remind you today of your job and that is to open national discussions on issues to find the best resolution. That is your job, and were it not, there would be no need for Congress.

Congressman Skelton, I demand that you apologize for your remarks. You need to recognize the disrespect that you issued to the gay and lesbian soldiers, like myself, who are currently serving regardless if we are recognized or not. I demand that you look at this from my perspective. I have spent the majority of my adult life fighting for a war in which you sent me to. I am fighting for your safety and freedom, and for every “mommy and daddies” seven year olds’ freedom and safety. I come in from a long day out in the streets of Baghdad and see on television my representative, my voice, condemning the act of acknowledging my existence.

Congressman regardless of your personal views on the issue, we are serving now. To be disrespectful to us is not only intolerant but ignorant. We deserve at the bare minimum an honest assessment and a fair judgment on the matter. In order for this to happen you, as the Chairman of the House Armed Services Committee, must allow these discussions to take place. I will continue fighting for your freedom congressman, will you cease blocking mine?