Now I got my life back together from all that doing positive things, trying to be the best role model I can be. Instead of the media congradulating me from this obstical, it chooses to paint a picture of me as a gay basher.

Let me teach you a little something about me cause I know y'all don't really know me. I am a black man from Memphis Tennessee who grew up in the south where I faced discrimination my whole life. I know very well how it feels for someone to judge you for something you have no control over so having gone through that I know how it feels. I took a vow that I didn't even have to say that I would never discriminate against anybody for anything other that how they treat me or others around them. So not only DO I NOT HATE gay people, I actually accept them for who and what they are. They always seem happy and most of them I met are very kind and nice individuals. Yes, and like most straight guys I joke around with the whole gay thing and I see it as comedy, not saying that's right or wrong but I don't do it out of hate. I don't hate fat girls but I make fun of them too. When I did that interview I didn't even know I was being interviewed.

I was on the set of shooting the movie the A Team and my friend that worked on the set brought the interviewer to my trailer. As he did so, he made fun of me for a poster that was made of me promoting a UFC event at my homegirls bar in Vancouver. The poster was a picture of me with a rainbow flag on the poster somewhere. This girl has been a friend of mine for 7 years and never used me as a meal ticket and if I would die for one friend it was nothing for me to help a friend promote business. So I offered to help promote her bar not knowing that the poster would make its way back to the set and I would be made fun of for going to a gay bar.

But I have to say that I visited her bar several times before this event. Not only did I enjoy myself but I was relieved that the guys at this bar did not hound me once. No one offered to buy me a drink. Not once did anybody try to take pictures with me with their arms all around me or do the what I call the 'prom date picture'.. taking a picture while holding your lower back.. which is my pet peeve by the way. Honestly I mean this in the best way, me being a sports figure I attract a lot of male attention wherever I go and MOST straight fans act GAYER than any guys that was at this gay bar that I visited my homegirl at. When I'm in the club guys always offer to buy me drinks, do the prom date picture, stare at me, try to get my attention, tries to dance with me.. even if I'm dancing with a hot chick already. Even though I love ALL MY FANS, this can be overwhelming sometimes, especially when I'm trying to unwind and have fun which in my line of work you don't get much time to do.

This being said, when I did this interview the interviewer witnessed my friend giving me shit and calling me gay. I was so embarrassed and didn't want my ego tainted because I'm a big tough fighter. So yes, I got quite defensive and I'm known to be the best shit talker in my business and a fighter in all aspects in life. So I made fun of him back, calling him gay. Only reason why I got a bad report from it was because this guy who was making fun of me and has been my friend on set for about four months (time spent working on the movie) and was gay for real and the reporter being the type of guy he is chose to make THAT his story not knowing that the guy and I were only shit talking like we did everyday. OR DID HE KNOW WE WERE SHIT TALKING OR NOT AND JUST WANTED A HOT SCOOP? That's not my concern now, my only concern is that I don't want people thinking of me in a way I'm not.

I am known for being honest and a trustworthy guy and a person that tells it like it is. This quality sometimes gets me in trouble, especially when my kids know there is no santa clause and there's no tooth fairy and the easter bunny is a distraction from the truth, and that pro wrestling is just entertainment. So everybody get used to me cause I'm not going to change one ounce, one bit for NO ONE. I am God's street soldier. And God is the only person that I care about impressing or judging me.

EVERYBODY LIGHTEN THE FUCK UP! LET'S HAVE FUN! THAT'S THE MOST IMPORTANT THING WE CAN DO RIGHT NOW! THERE'S TOO MUCH NEGATIVITY IN THIS WORLD, SO LET'S JUST FOCUS ON THE POSITIVE THINGS AND I GUARANTEE IF WE DO THAT THINGS CAN ONLY GET BETTER! 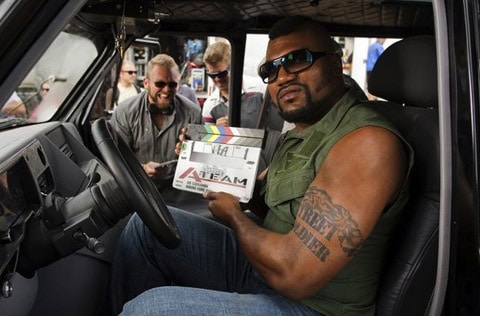 Rampage Jackson, the UFC Fighter who is now starring as Mr. T in the A-Team movie, is defending remarks he made last week that "acting is kind of gay" and his alleged use of an anti-gay slur toward a crew member.

Writes Jackson in a lengthy post on his website: "Now I got my life back together from all that doing positive things, trying to be the best role model I can be. Instead of the media congradulating me from this obstical, it chooses to paint a picture of me as a gay basher."

He then commands people to lighten up: "EVERYBODY LIGHTEN THE FUCK UP! LET'S HAVE FUN! THAT'S THE MOST IMPORTANT THING WE CAN DO RIGHT NOW! THERE'S TOO MUCH NEGATIVITY IN THIS WORLD, SO LET'S JUST FOCUS ON THE POSITIVE THINGS AND I GUARANTEE IF WE DO THAT THINGS CAN ONLY GET BETTER!"

The bulk of Jackson's excuse I've posted, AFTER THE JUMP…