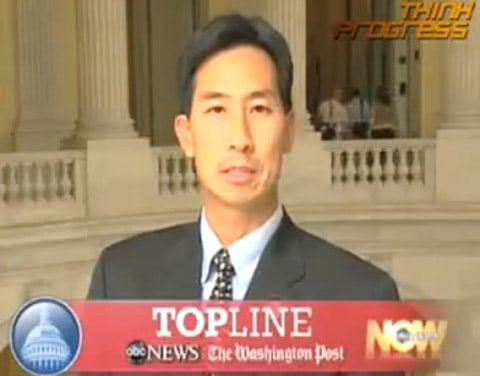 Wonk Room reports on Rep. Charles Djou's (R-HI) "yes" vote on repealing "Don't Ask, Don't Tell". Djou offers a reason that has nothing to do with unit cohesion or military readiness:

"On that particular issue, it comes from personal experience. I have served for nearly 10 years now in the United States Army Reserve. What concerned me about the Don’t Ask, Don’t Tell policy is that it just simply doesn’t work. And I saw too many instances as an army reservist, soldiers would sign up for a re-enlistment bonus. Get this gigantic sum from the American taxpayer. And then as soon as the unit gets called up to mobilize to Iraq and Afghanistan, they suddenly claim they are gay, with no prior indication of that whatsoever. Get the discharge and keep the bonus. That’s wrong, that’s unfair and that’s why this policy should be changed."

Djou was one of five Republicans to vote in favor of repeal.