Senator Robert Byrd, the longest-serving member of Congress in history, is dead at 92 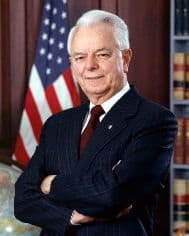 The NYT: "Mr. Byrd served 51 years in the Senate, longer than anyone in American history, and with his six years in the House, he was the longest-serving member of Congress. He held a number of Senate offices, including majority and minority leader and president pro tem.

But the post that gave him the most satisfaction was chairman of the Appropriations Committee, with its power of the purse — a post he gave up only last year as his health declined. A New Deal Democrat, Mr. Byrd used the position in large part to battle persistent poverty in West Virginia, which he called “one of the rock bottomest of states.”

Mr. Byrd’s political life could be traced to his early involvement with the Ku Klux Klan, an association that almost thwarted his career and clouded it intermittently for years afterward.

In the early 1940s, he organized a 150-member klavern, or chapter, of the Klan in Sophia, W.Va., and was chosen its leader at a meeting. After the meeting, Joel L. Baskin, the Klan’s grand dragon for the region, suggested that Mr. Byrd use his “talents for leadership” by going into politics.

“Suddenly, lights flashed in my mind!” Mr. Byrd later wrote. “Someone important had recognized my abilities.”

Mr. Byrd insisted that his klavern had never conducted white-supremacist marches or engaged in racial violence. He said in his autobiography that he had joined the Klan because he shared its anti-Communist creed and wanted to be associated with the leading people in his part of West Virginia. He conceded, however, that he also “reflected the fears and prejudices” of the time.

In more recent weeks, Byrd in May announced he would vote "yes" on a compromise bill toward repealing "Don't Ask, Don't Tell", but only if there a was a 60-day review period added to it that would allow Congress to approve its language and intent.

Said Byrd: “This period of time will allow the Congress, along with the American people, to thoroughly review the proposed policy recommendations to ensure that these changes are consistent with the standards of military readiness, military effectiveness, unit cohesion, and recruiting and retention for our Armed Forces. With these changes, I will support the amendment expected to be offered by Senator Lieberman to the Department of Defense Authorization bill.”

In May 2008, Byrd wept openly on the Senate floor after news that his close friend and colleague, the late Senator Ted Kennedy, had suffered a seizure brought on by a malignant brain tumor.

The WaPo: "Mr. Byrd had been hospitalized last week with what was thought to be heat exhaustion, but more serious issues were discovered, aides said Sunday. No formal cause of death was given."