A new study led by  Kerith Conron, an associate research scientist at Northeastern University and a research fellow at the Harvard School of Public Health, concluded that gay men are slimmer and lesbians heavier than their heterosexual counterparts: 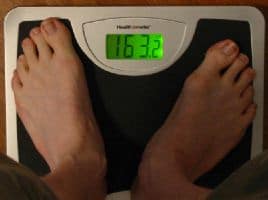 "Boston researchers determined that gay women were more than twice as likely as straight women to be obese, while gay men were 50 percent less likely to be obese compared to their heterosexual counterparts, according to a report published in the American Journal of Public Health. After scrutinizing a health survey of more than 67,000 Massachusetts residents between the ages of 18 and 64, the researchers found that 14 percent of gay men were obese versus 21 percent of straight men. The opposite was true of gay women: 26 percent were found to be obese, as compared with 17 percent of the straight women.

The researchers also found that both gay men and gay women were more likely to be current smokers compared to their heterosexual counterparts. And gay women were more likely to have multiple heart disease risk factors than straight women…Conron suspects that cultural differences might at least partly explain the weight divide. It may be more acceptable in the lesbian community for women to be full-sized, she said."