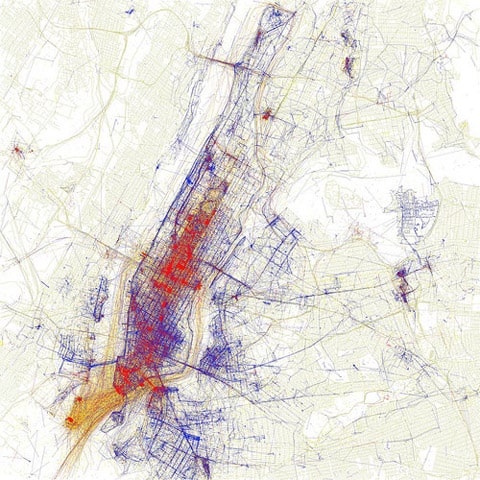 Here's an interesting graphic for you map and data lovers, based on geotagging Flickr data:

"Blue points on the map are pictures taken by locals (people who have taken pictures in this city dated over a range of a month or more).Red points are pictures taken by tourists (people who seem to be a local of a different city and who took pictures in this city for less than a month).Yellow points are pictures where it can't be determined whether or not the photographer was a tourist (because they haven't taken pictures anywhere for over a month). They are probably tourists but might just not post many pictures at all."

There's a whole set of them for various cities.

In related news, flashmob group Improv Everywhere recently busted out NYC sidewalk lanes for locals and tourists, AFTER THE JUMP…