THE PRESIDENT: Hello, hello, hello! (Applause.) Hello, everybody! (Applause.) I was going to say welcome to the White House — but you guys seem like you feel right at home. (Laughter.) You don't need me to tell you — it’s the people’s house.

A couple of acknowledgements that I want to make very quickly — first of all, our Director of the Office of Personnel Management, who has just done an extraordinary job across the government — give John Berry a big round of applause. (Applause.)

THE PRESIDENT: All right, John! (Laughter.)

Our chair of the Export/Import Bank, helping to bring jobs here to the United States of America — Fred Hochberg. (Applause.) Our chair of the Council on Environmental Quality, doing outstanding work each and every day — Nancy Sutley. Where is she? (Applause.) Nancy is a little vertically challenged, but I see her over there. (Laughter.)

We've got here a trailblazer for federal appointees — we are so proud of her — Ms. Roberta Achtenberg is here. Give Roberta a big round of applause. (Applause.) And then I understand we've got a terrific country singer — Chely Wright is in the house. (Applause.)

In addition — I know they had to leave because they had votes, but you guys obviously don't have just fiercer warriors on your behalf than a couple of our openly gay and lesbian members of Congress — Tammy Baldwin and Jared Polis. (Applause.) They are openly terrific. (Laughter.) They do great work.

And it is also great to have so many activists and organizers from around the country — folks who fight every day for the rights of parents and children and partners and citizens to be treated equally under the law. And so we are very proud of all of you. (Applause.)

Oh, and by the way, the guy standing next to me — this is Joe Biden. (Applause.) Just because he’s a Phillies fan — he’s from Delaware. (Laughter.)

Now, look, the fact that we’ve got activists here is important because it’s a reminder that change never comes — or at least never begins in Washington. It begins with acts of compassion -– and sometimes defiance -– across America. It begins when ordinary people –- out of love for a mother or a father, son or daughter, or husband or wife -– speak out against injustices that have been accepted for too long. And it begins when these impositions of conscience start opening hearts that had been closed, and when we finally see each other’s humanity, whatever our differences.

Now, this struggle is as old as America itself. It’s never been easy. But standing here, I am hopeful. One year ago, in this room, we marked the 40th anniversary of the Stonewall protests. (Applause.) Some of you were here, and you may remember that I pledged then that even at a time when we faced enormous challenges both on the economy and in our foreign policy, that we would not put aside matters of basic equality. And we haven’t.

We’ve got a lot of hard work that we still have to do, but we can already point to extraordinary progress that we’ve made over the past year on behalf of Americans who are gay and lesbian, bisexual and transgender.

Just stay with me here for a second. Last year, I met with Judy Shepard, Matthew Shepard’s mom, and I promised her that after a decade’s-long struggle, we would pass inclusive hate crimes legislation. I promised that in the name of her son we would ensure that the full might of the law is brought down on those who would attack somebody just because they are gay. And less than six months later, with Judy by my side, we marked the enactment of the Matthew Shepard Act. It’s now the law of the land. (Applause.)

Just a few moments ago, I met with Janice Langbehn and her children. Where did Janice go? There they are right there. And when Janice’s partner of 18 years, Lisa, suddenly collapsed because of an aneurysm, Janice and the couple’s three kids were denied the chance to comfort their partner and their mom — barred from Lisa’s bedside. It was wrong. It was cruel. And in part because of their story, I instructed my Secretary of Health and Human Services, Kathleen Sebelius, to make sure that any hospital that’s participating in Medicare or Medicaid -– that means most hospitals — (laughter) — allow gay and lesbian partners the same privileges and visitation rights as straight partners. (Applause.)

After I issued that memorandum, I called Janice and I told her the news. And before we came out here today, I wanted to make sure that I had followed up — Secretary Sebelius will officially be proposing this regulation. And I can also announce that the Secretary has sent a letter today asking these hospitals to adopt these changes now -– even before the rule takes effect. (Applause.) Nothing can undo the hurt that her — that Janice’s family has experienced. And nothing can undo the pain felt by countless others who’ve been through a similar ordeal –- for example, Charlene Strong is here. She lost her wife, Kate Fleming — and Charlene is here along with Kate’s mom, who said on behalf of all mothers, thank you. Because we think it’s the right thing to do. (Applause.)

In addition, I’ve issued an executive order[SIC]* to extend as many partnership benefits to gay and lesbian federal employees as possible under current law. And I’m going to continue to fight to change the law: to guarantee gay federal employees the exact same benefits as straight employees -– including access to health insurance and retirement plans. (Applause.) And in an announcement today, the Department of Labor made clear that under the Family and Medical Leave Act, same-sex couples –- as well as others raising children -– are to be treated like the caretakers that they are. (Applause.)

Because I believe in committed — I believe that committed gay and lesbian couples deserve the same rights and responsibilities afforded to any married couple in this country, I have called for Congress to repeal the so-called Defense of Marriage Act. (Applause.) We are pushing hard to pass an inclusive employee non-discrimination bill. (Applause.) No one in America should be fired because they’re gay. It’s not right, it’s not who we are as Americans, and we are going to put a stop to it.

And finally, we’re going to end “Don’t Ask, Don’t Tell”. (Applause.) That is a promise I made as a candidate. It is a promise that I reiterated as President. It’s one that this administration is going to keep. Now, the only way to lock this in -– the only way to get the votes in Congress to roll back this policy — is if we work with the Pentagon, who are in the midst of two wars.

And that’s why we were gratified to see, for the first time ever, the Secretary of Defense, Bob Gates, testify in favor of repeal. And the Chairman of the Joint Chiefs of Staff, Mike Mullen, has repeatedly and passionately argued for allowing gay men and women to serve honestly in the military. (Applause.) We know that forcing gay and lesbian soldiers to live a lie or to leave the military, that doesn’t contribute to our security — it harms our security.

And thanks to Patrick Murphy and others, for the first time in history, the House has passed a repeal that would allow gay men and women to openly serve in our armed forces. And this repeal is authored so that the Pentagon can complete its review of the policy — which is critical, by the way, not only to passage, but it’s also critical to making sure that the change is accepted and implemented effectively. In the Senate, the Armed Services Committee has approved repeal for the first time, and the full body is poised to vote soon.

So here’s the bottom line: We have never been closer to ending this discriminatory policy. And I’m going to keep on fighting until that bill is on my desk and I can sign it. (Applause.)

Of course, ultimately, change is about more than just policies in our government. And that’s why I want to close by recognizing all the young people who are here -– I had a chance to take a bunch of pictures with them, just really impressive folks who are advocating on their behalf. I know there are some in the audience who have experienced pain in their lives, who at times have been — felt like outcasts, who have been scorned or bullied, and I know that there are families here on behalf of loved ones who are no longer with us, some in part because of the particularly difficult challenges that gay men and women still face.

This is a reminder that we all have an obligation to ensure that no young person is ever made to feel worthless or alone — ever. Now, at the same time, I think there’s plenty of reason to have some hope for many of the young people including those who are here today. They’ve shown incredible courage and incredible integrity — standing up for who they are. They’ve refused to be anything less than themselves.

And we all remember being young — sort of. (Laughter.) But it’s not easy. It’s not easy standing up all the time and being who you are. But they're showing us the way forward. These young people are helping to build a more perfect union, a nation where all of us are equal; each of us is free to pursue our own versions of happiness.

And I believe because of them that the future is bright. It’s certainly bright for them. Of course, it does depend on all of us. It depends on the efforts of government and the activism of ordinary citizens like yourselves. It depends on the love of families and the support of communities. And I want you all to know that as this work continues, I’m going to be standing shoulder-to-shoulder with you, fighting by your side every step of the way. (Applause.) 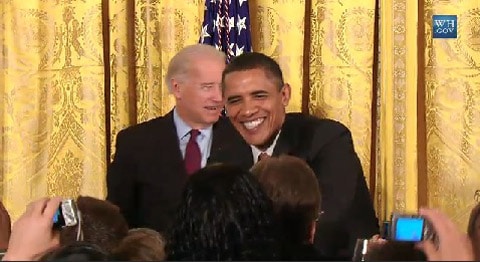 Obama also promised to continue fighting for DADT repeal until the bill reaches his desk, and reiterated his commitment to repealing the Defense of Marriage Act.

The President acknowledged the youth in the room and said that they offer hope for our future.

Please post your comments. As promised, video and transcript, AFTER THE JUMP…