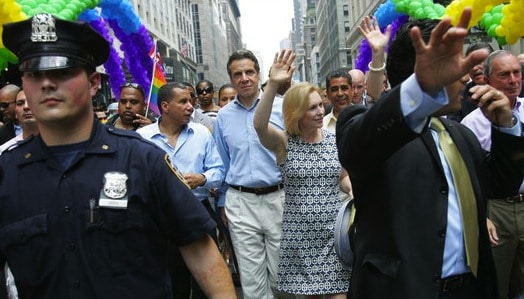 The New York Times has published a piece on Andrew Cuomo's somewhat shaky record on gay rights. Though these days he can be found marching in pride parades, picking the brain of Christine Quinn and coming out in support of same-sex marriage, he apparently has had a shakier record in the past.

The article notes some instances when he worked on his father's failed attempt for the mayorship in the 70's against Ed Koch.

As the race entered its final weeks, supporters of the senior Mr. Cuomo plastered predominantly Italian sections of Brooklyn and Queens with posters that declared, “Vote for Cuomo, not the Homo.”

Both Cuomos denied being involved in or aware of the posters’ creation — claims that gay advocates, and Mr. Koch himself, found difficult to believe.

And during the elder Cuomo's succesful run at the job:

During his father’s run for governor in 1982, Andrew Cuomo served as campaign manager and participated in tense negotiations with gay advocates, whose support his father was quietly courting.

In return for their endorsement, several gay leaders insisted on publishing a newspaper advertisement trumpeting the commitments that they had extracted from the Cuomo campaign, including his agreement to issue an executive order prohibiting discrimination against gay employees in state government.

Even as the elder Mr. Cuomo said he would issue the order, his son worried that publicizing the deal would alienate more conservative religious voters, those involved in the campaign said.

“We had great difficulty getting the Cuomo campaign to agree on the wording of an ad,” recalled Andrew Humm, a longtime gay-rights advocate. They were told, Mr. Humm said, that “Andrew was the problem.”

When the senior Mr. Cuomo signed the executive order in 1983 — a major milestone for the gay community — Andrew Cuomo seemed intent on playing it down to blunt any backlash.

Allen Roskoff, a gay state employee who pushed for the measure, recalled a telephone conversation at the time with the younger Mr. Cuomo, who asked for his reaction to the executive order. Mr. Roskoff, who did not think the measure went far enough, told him, “It’s terrible — it’s not worth the paper it was written on.”

The big question is how much does he really support marriage equality? Apparently enough for him to firmly state that he "will get it done."

Peter Yacobellis, Governor Paterson's Deputy Director of Administration, has released a supportive statement in response to the NY Times article:

"My parents — the two people who love me most, took 30 years to get to a place of understanding and further: wanting to fight for my rights. From that perspective I fully embrace individual evolution on our issues (so long as they get to the enlightened place when it counts). Andrew Cuomo unabashedly champions the full LGBT agenda.  I don't doubt the strength of his support nor his commitment to make marriage and other rights/protections a priority in his administration."