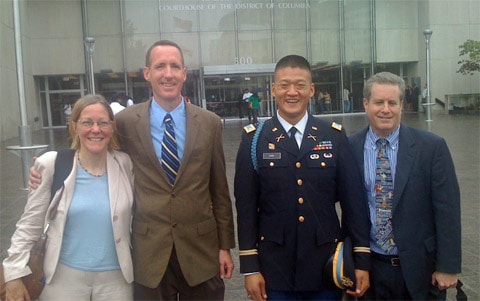 Choi and Pietrangelo with attorneys Ann Wilcox and Mark Goldstone outside the coutrroom today, tweeted by Scott Wooledge.

Charges against Lt. Dan Choi and Capt. Jim Pietrangelo were dropped today before a trial could begin over their arrest in a "Don't Ask, Don't Tell" protest in front of the White House.

"Lt. Dan Choi and James Pietrangelo, a gay army captain honorably discharged for disclosing his sexual orientation, were in court Wednesday on charges of failure to obey police orders during the March and April protests. All charges were dropped against them.

Choi and his attorney had subpoenaed President Barack Obama to appear, but an attorney for the prosecution said the subpoena wasn't served.
Prosecutor Christine Chang declined to comment on why the government dropped the case.
Choi said he believes Obama administration officials didn't want to draw attention to the policy.