Ian Benardo, who auditioned for American Idol in 2007, has reportedly filed a $300 million anti-gay discrimination complaint with New York's Division of Human Rights, claiming he was exploited because he's gay, Zap2It reports: 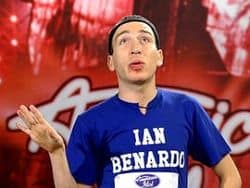 "In the complaint, Benardo says the 'Idol' powers that be 'exploited my non-conforming appearance and sexual orientation. They did this by directing me to 'gay it up' in any appearance I made on camera,' according to the Journal-Constitution. '… Although characterized as an 'audition' to the public at large, in fact, I was and was paid as an employee of respondents for each appearance.'Based on the word 'audition,' we're assuming Benardo is referring to his 2007 tryout, which took place in New York."

The AJC reports: "He said employees of 'Idol' derided him for his appearance using words like 'fag' and 'homo.' 'The workplace,' he said, 'was permeated with discriminatory intimidation, ridicule, insults and hostile and offensive comments that were so severe as to alter my working conditions and create an environment that was abusive and ultimately threatening to my safety.'”

Watch part of Benardo's appearance on the show in May, as part of a good-bye to Simon Cowell, AFTER THE JUMP…