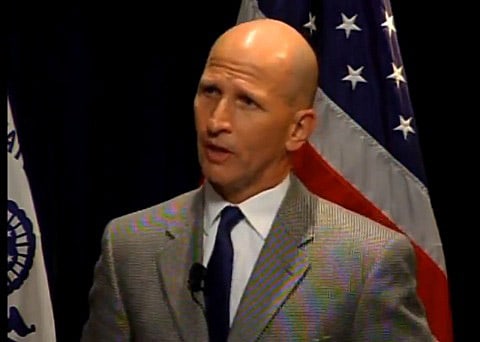 The Family Research Council, in addition to putting out fraudulent pamphlets in Holland, Michigan, is ramping up its attacks on gays in the military in advance of the Senate debate on the Defense bill. Last week they put out a podcast with an all-star cast of right-wing nutjobs and dangerous crackpots to try and give credence to their distorted statements about gay people.

On Tuesday, they released a clip of that podcast featuring the American Family Association's Dr. Robert LaButta, a retired U.S. Army Col., who suggested that allowing gays to serve openly would somehow put the military at greater risk of HIV, STDs, and psychological disorders.

…As a military physician, I’m guided by two things. Was guided by two things: The military oath and the military mission. Most of the times, the military mission and the medical oath coincide with each other almost perfectly. Very rare circumstances, say, in combat triage where they don’t. But mostly, they go hand in hand.I think that the military that – the health of the services, the health of the forces would be decremented. I also think the care of the person, if we said that people could come into the military and openly practice a homosexual behavior, we’re not caring for that person. So for both of my – the oath that I took, it actually violates both of them.

The entire podcast. with transcript, is here.

Previous Post: « Actors Will Not Pop Out from Behind a Curtain to Say ‘Hey, I’m Gay’ on Howard Bragman’s Coming Out Show
Next Post: Gay Activists Arrested at Capitol Rotunda in ENDA Protest »