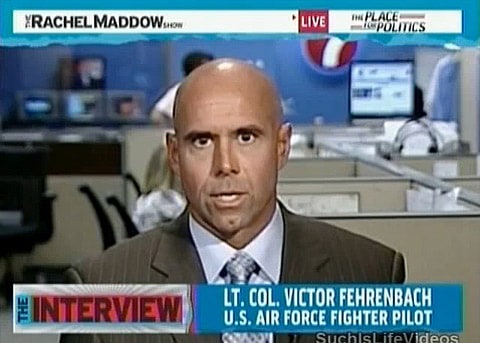 Lt. Col. Victor Fehrenbach, a 19-year veteran whose training cost the Air Force $25 million, updates Rachel Maddow on his status — his discharge under DADT remains in limbo. Fehrenbach, who has flown 400 combat hours and earned nine medals, also talks to Maddow about the Pentagon survey:

"You don't need a hypothetical study or survey. You can come to work with me and see real airmen, real warriors who care about the mission and only care that I'm able to do my job."

Previous Post: « GOP Congressmen Side with Islamic Governments to Oppose Obama Request to UN to Approve Gay Group’s Consultative Status
Next Post: Video: Pink Flung Out of Harness into Stage Barricade in Germany »