The Wachowskis, the siblings who directed The Matrix, have begun casting their latest project, CN9. There's still plenty of mystery surrounding it, as Cinematical notes: 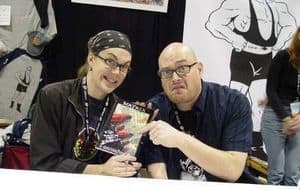 "Production Weekly took to Twitter to report that casting on the film has begun. There's not a wealth of information out there about CN9 — in fact, all we really know for sure at this point is that it's going to be a "hard-R war picture about a homosexual American soldier who falls in love with an Iraqi." But, before you assume it's just Brokeback Mountain set in the Middle East, consider that CN9 could stand for the ninth cranial nerve (it does in medical terminology), which is the nerve responsible for receiving information from the tongue, middle ear, and tonsils according to website Playlist. When you do that, the site suggests that it doesn't seem like a stretch to picture the filmmaking duo once again venturing into the world of strange alternate realities and sci-fi. Of course, people could be reading this totally wrong — CN9 might stand for something entirely different. That's the thing, at this point no one really knows."

On another note, can anybody fill us in on whether Larry Wachowski did indeed complete a male-to-female gender transition? The general info out there appears to still be unclear.