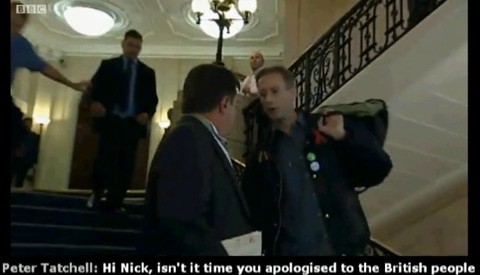 British National Party Leader Nick Griffin was confronted by gay activist Peter Tatchell at London's Milbank Studios yesterday, and it was all caught on camera.

"Griffin had been invited to the Palace because he is a Euro MP and gloated about it on GMTV hours before.But as he began touring other TV studios, furious royal aides banned the smug extremist – accusing him of blatantly politicising the social event.A Palace spokesman said: 'Nick Griffin overtly used his invitation for party political purposes through the media. This increased the security threat and the potential discomfort to the many other guests attending.'… Former neo-Nazi Griffin, 51, had also boasted about the royal party on his BNP blog, calling his attendance a "highly symbolic breakthrough".The invitation opened up the horrifying prospect of the Queen inadvertently meeting Griffin on the manicured lawns of Buckingham Palace.He could also have been photographed near the monarch, which would have been seized upon by his supporters.Griffin was already dressed in a hired morning suit, cravat and waistcoat when he was told of the ban by his officials." 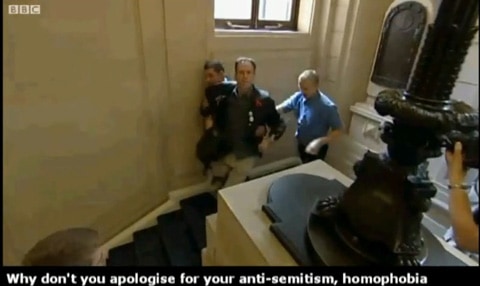 Upon leaving the BBC, Griffin was confronted by Tatchell, who told London's Pink Paper:

"As soon as he saw me he had a look of horror on his face. I asked Griffin: 'Isn't it about time you apologised to the British people for your party's long history of anti-Semitism, homophobia and attacks on the Muslim community?' Griffin looked sheepish. He seemed stumped for an answer. I asked him again. Then he just ran off. What a coward. Griffin's minders shoved me down the stairs. It's proof that the BNP doesn't believe in free speech or in the public asking their leader awkward questions. It shows the kind of autocratic society the BNP would impose if they ever won power.  For many years, the BNP has preached a totalitarian ideology of anti-Jewish, anti-black, anti-gay and anti-Muslim hatred. The party has a long and strident hatred of non-white immigrants and asylum seekers. It's racist views are an affront to democratic values. Behind Nick Griffin's silky words and smiles lurk his party's neo-fascist roots. The BNP is a threat to human rights and social solidarity."

Watch the confrontation, AFTER THE JUMP… 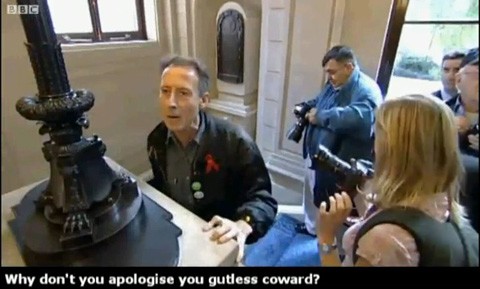