Igor Volsky at The Wonk Room investigated some information from Advocate reporter Kerry Eleveld that prior to Truman's 1948 executive order integrating the armed forces a number of surveys were undertaken to determine troop attitudes. 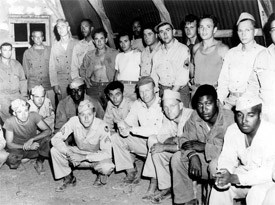 Today, I traveled to the National Archives and recovered some of the surveys the military conducted about the troops’ attitudes towards black people between 1942 and 1946. At the time, the military — along with the overwhelming majority of the country — opposed integrating black servicemembers into the forces and preferred a ’separate but equal’ approach that would have required the military to construct separate recreation spaces and facilities. One month before Truman’s order, a Gallup poll showed that 63% of American adults endorsed the separation of Blacks and Whites in the military; only 26% supported integration.

These surveys show that the same attitude pervaded the military: 3/4 Air Force men favored separate training schools, combat, and ground crews and 85% of white soldiers thought it was a good idea to have separate service clubs in army camps.

Check out the military survey from the 40's, AFTER THE JUMP…

Previous Post: « Any Random Civilian with a PIN Number Can Participate in the ‘Confidential Dialog’ Portion of the ‘DADT’ Troop Survey
Next Post: Watch: Bruce LaBruce Gay Zombie Film Banned in Australia »